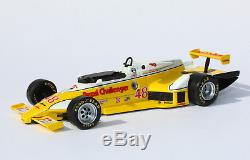 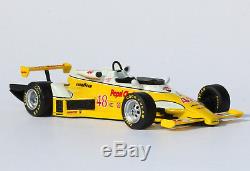 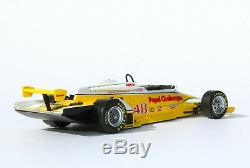 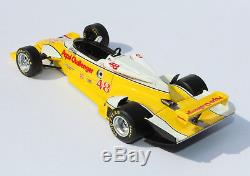 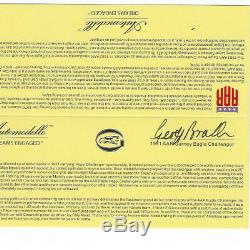 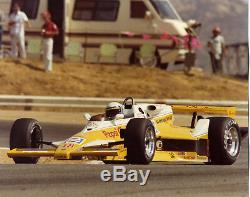 Exterior Color: Yellow and White. Marque: All American Racers "Eagle". Limited Edition: 148 Geoff Brabham Hand-signed certificates. This mesmerizing masterpiece will serve as a lasting tribute to the genius of Dan Gurney, the commitment of All American Racers, and the dedication to accurate scale replication from the team of skilled artisans at Automodello. To allow it to be enjoyed and viewed from a 360-degree angle on a daily basis, free of dust or accidental damage, it will therefore be packaged on a stylish plinth with a clear protective display cover.

This is Automodello's first open-wheel racer in 1:43 scale for Dan Gurney's favorite AAR race car, raced to pole at Riverside by Geoff Brabham. But of course Gurney didnt stop at being merely a world-class driver. Gurney founded the All American Racers team in 1964, and by 1966 AAR was designing competitive cars in USAC (Indy Car) and Formula 1 simultaneously. Dans win of the 1967 Grand Prix of Belgium in an Eagle Gurney-Weslake V12 remains the first and only time that an American citizen built and raced a car of his own construction and put it into the winners circle of a World Championship F1 race.

Meanwhile, Gurney Eagles were winning in Indy Car, and starting in 1969 AAR focused its full attention on that series. Over the next decade AAR would score 22 Indy Car victories7 by Gurney himselfand a Championship for driver Bobby Unser in 1974. The 1981 AAR Eagle Pepsi Challenger scored the last of those 22 victories. In 1980 AAR introduced a version of its Eagle Indy Car with the truly innovative Boundary Layer Adhesion Technology (aka BLAT). The acronym referred not to the sound quality of the stock-block pushrod Chevy V8 but the novel system of generating aerodynamic downforce developed by Gurney and engineers John Ward and Trevor Harris.

While conventional cars of the day relied on ground effects, the Eagle generated twin vortices under the rear bodywork to generate downforce, with the engine exhaust routed to further enhance efficiency. The car looked like nothing else on the track, and its performance soon proved just as singular. When the Eagle showed up at Indianapolis in 1981 carrying Pepsi Challenger sponsorship, it looked poised to give the turbocharged Cosworth cars all they could handle. Driver Mike Mosely qualified second, but retired early due to engine trouble. More reliability issues plagued it at the next race in Milwaukee, resulting in a 25th place starting position at promoters option on the grid.

But the tight Milwaukee Mile oval suited the Eagles prodigious grip, and Mosely set about working his way through the field. Picking off cars one by one Mosely eventually took the lead and finished more than a lap out front of his nearest competitors, completing an improbable, impressive last row-to-first run. It would prove to be the AAR Eagle Pepsi Challengers only win, as an unfortunate series of mechanical failures and incidents conspired to deny the team another win despite leading in four other races. Meanwhile, a consortium of owners was undertaking a conspiracy of their ownone that ultimately succeeded in having the car outlawed. The fact that racing politics did what competing cars could not in no way diminishes the fascinating and all too brief history of the AAR Eagle Challenger.

Its innovative spirit and superior performance are fitting tributes to Gurney, and the appeal they inspire in collectors has moved Automodello to recreate it as a precision replica in exacting 1:43 scale that has been officially licensed by the All American Racers team. Tribute Editions come with a certificate of authenticity hand-signed by Pepsi-sponsored number 48 car driver Geoff Brabham and will be limited to just 148 pieces. In addition, there will be 150 pieces of the White Castle liveried team car with Cosworth power as driven by Chip Mead. Thank you for joining Automodello in celebrating this unique piece of American open-wheel racing history, and we hope you enjoy your model for years to come.

The item "1981 Gurney Eagle Challenger Pepsi 143 Geoff Brabham Signed 43A012 Automodello" is in sale since Saturday, September 23, 2017. This item is in the category "Toys & Hobbies\Diecast & Toy Vehicles\Cars, Trucks & Vans\Contemporary Manufacture". The seller is "diecasm" and is located in Buffalo Grove, Illinois. This item can be shipped worldwide.