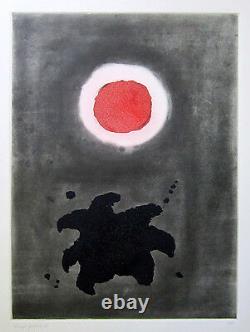 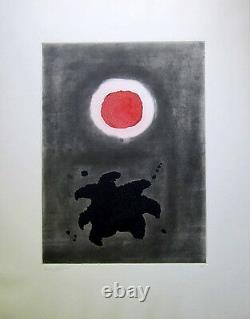 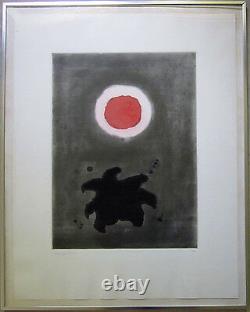 ADOLPH GOTTLIEB Signed 1971 Original Color Etching/Aquatint - "Night Glow". This rare original color etching/aquatint is entitled "Night Glow" and is signed in pencil by the artist on the front lower left "Adolph Gottlieb" and dated "1971". It is also numbered in pencil on the lower right "8/65", from the total limited edition of only 65 impressions printed on Fabriano paper.

He attended public schools in New York and left high school to work his way to Europe at the age of 17, when he resolved to be an artist. Gottlieb lived in Paris for six months where he visited The Louvre Museum daily and audited sketch classes at the Academie de la Grande Chaumiere, then spent another year visiting museums and galleries in Berlin, Munich, Vienna, Dresden, among other major European cities. Gottlieb attended classes at The Art Students League, Educational Alliance, and other local schools where he met early friends including Mark Rothko, John Graham, Milton Avery, and Chaim Gross.

Barnett Newman was another early and close friend. Gottlieb valued the artist's role as a leader and creator, and he served as both with his art and his organizing abilities. He was a founding member of artist's groups as early as The Ten in 1935, and helped organize the Federation of American Painters and Sculptors (1939) and New York Artist-Painters (1943); was instrumental in organizing the Forum 49 sessions in Provincetown and New York City and was the primary organizer of the protest that led to the naming of he and his friends as "The Irascibles" in 1951. His art was the subject of 34 solo exhibitions in his lifetime, including a retrospective exhibition jointly organized by the Solomon R. Guggenheim Museum and the Whitney Museum of American Art in New York that filled both museums concurrently in 1968.

He was the recipient of numerous prizes and awards, among which he was the first American to win the Gran Premio at the Bienal do São Paolo in 1963. The item "ADOLPH GOTTLIEB Signed 1971 Original Color Etching/Aquatint Night Glow" is in sale since Monday, May 19, 2014.