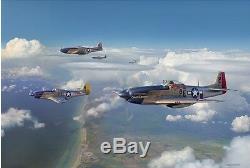 WE SUPPORT OUR TROOPS AND COUNTRY. THE ARTIST - Jim Laurier. Artist Jim Laurier is a native of New England, growing up in New Hampshire and Massachusetts.

He has been drawing since he could hold a pencil and throughout his life he has worked in many mediums creating work on a variety of subjects over the years. Jim prefers to work in oils on linen or canvas, with realism in his paintings being the goal.

A long time aviation enthusiast and pilot, one of his favorite subjects is aircraft. He combines his love of history with his flying experiences to create some of the most realistic and historically accurate aviation paintings seen today. He is widely known for his technical accuracy and attention to detail, which have become the trademarks of his work. Jim's paintings have been displayed at various museums, air bases, and art shows since 1992 including one man shows at The Mighty Eighth Air Force Museum in Savannah, Georgia (2000) and The Franco- American Society in Manchester, New Hampshire (2001). He has art work hanging in The Pentagon and other work on permanent display at Military bases and from the Eastern U.

Jim has won awards at juried art shows including two Par Excellence Awards from the Experimental Aircraft Association, an award from the U. Naval Air Museum, The Hooper Award for Editorial Excellence, and an award from the Simulflite Training Center in Dallas, Texas. Jim has also become a prolific illustrator of military subjects and his work can be seen in many books, magazines, and calendars. As he moves into the future, Jim will continue to paint and illustrate military subjects, but he will also complete new work in different areas such as maritime art, wildlife and landscapes, and other subjects of his personal interest. He believes it is important to explore other themes to grow and excel as an artist. The challenge for an artist should be to consistently strive to improve his or her work and to always seek new knowledge towards that end. Jim Laurier Signed & Numbered Limited Edition Archival Print. The 352d Fighter Group was one of the most highly decorated USAAF Fighter Groups in World War II, producing many leading aces of the war.

The 352d was composed of three squadrons: (the 328th, 486th and 487th Fighter Squadrons). Once deployed to the European Theater of Operations the group was eventually headquartered in Bodney, England before being forward deployed to Belgium. It performed a variety of missions for the Eighth Air Force, but predominantly served as bomber escort. ALMOST HOME was created a s tribute to the 352nd Fighter Group. A combat out, or loose formation of 352nd P-51 Mustangs is depicted crossing the coast of France over the English Channel on their way home to Bodney, England.

Whisner in Moonbeam McSwine (15.5 victories). During WWII the 352nd flew 420 missions, 59,387 operational combat hours, destroyed 776 enemy aircraft and had 29 aerial aces. They were known as The Blue Nosed Bastards of Bodney. To the Luftwaffe, they were probably simply known as trouble. This print is also available in the following format.

Each canvas is hand coated with a special clear coat that give the canvas prints UV protection and surface ink protection, In addition, the coating really enhances the depth of color of the image. Mounting and stretching of giclees will be the responsibility of the customer. All prints will be signed by the Artist and will come with a Certificate of Authenticity. All Limited Edition prints are signed and numbered (S/N) by the artist. Limited Edition prints are restricted to a certain number.