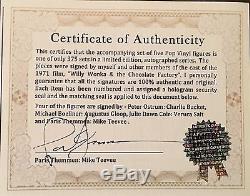 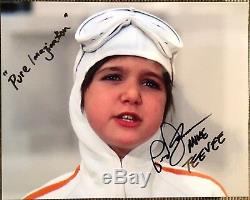 Greetings to you, Funko/Wonka fan! Yay, we're Pop Vinyls! I'm Paris Themmen, the actor who played Mike Teevee in the 1971 film, Willy Wonka & the Chocolate Factory. I personally curated this series and it is only available through me!

Violet Beauregarde: NOT Signed, (SUMMER CONVENTION EXCLUSIVE). So again to be clear, you are getting five Pops but only four of them are signed. The fifth one however is a rare, Summer Convention Exclusive. Two of the other Pops have been vaulted and discontinued.

A LIMITED EDITION, numbered holograph affixed to each Pop, proving they came from me. A certificate of authenticity (signed by me, with matching, numbered holograph). A black and white, 8 X 10 photo of me as Mike Teevee. Please see my other auctions where I offer other items signed by Wonka kids. Or come to see me on the web at Wonkapops! The item "AUTOGRAPHED signed FUNKO POP VINYL LIMITED EDITION SET FIVE WONKA KIDS! + XTRAS" is in sale since Monday, April 8, 2019.