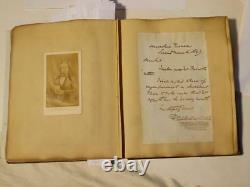 18thC 2nd Duke Wellington Personal Autograph CDV Royalty Album Charles Dickens. Colours may differ due to any flash used. Serious Collector or Museum archive item. This item is at the bank and I will need a little notice before you come to veiw it.. And to be honest with you I NEVER veiwed this album before I bought it... It cost me a small fortune... If you are, like me.... Are interested in this sort of UNIQUE - ONE OFF entire's, letters and signatures of FAMOUS PEOPLE from the 18-19th Century you will love it...

This album is a TREMENDOUS item of social history from the 18 - 19th Century... It would be such a shame to SPLIT this album up... This sort of album was a pastime for the very RICH folks back in the Victorian period....

Some grand houses, Lords & Ladies of the country house estates would COLLECT this sort of thing... Often you will see albums full of EMBOSSED FAMILY CRESTS & MONOGRAMS from letter heads of the famous people of the time.. Goes a little further than that... It is on a differant scale... Very few people during this time would be able to collect this sort of item....

And you would have to be within the circle of Royalty, Dukes, Lords & Ladies etc... To even come near to getting a hold of some of these letters.. UNLESS of course they were sent to YOU or someone close related to you. This album has been the personal album belonging to 2nd Duke of Wellington ARTHUR RICHARD WELLESLEY 1807 - 1884. He was the eldest son of 1st Duke of Wellington Arthur Wellesley.

The whole SPINE curved part is LOOSE... The small bit of leather is with it but loose from the top left side.... Inside it has nice marbled paper within the covers. Has pencil wording top left corner..

Anyway thats only part of the MYSTERY of the book.. You will find that most of the letters are to the Duke of Wellington from the people with whom he was in circles with. Thats why there are so many interesting items within the book.. When you google search this name. It is MOST INTERESTING too..

Then it has 2 later added lined paper pages with an INDEX and each SURNAME is in alphabetical order... All written by the same hand.... Some have more than one page....

99 on this written index. Here I will just tell you how many items there are within this book.... These are my countings and findings... TOTAL of 148 items pasted - stuck in the book. Grand total of 227 items of interest. Split up into the following.... 110 signatures - autographs on the letters, envelops and on the cut paper ones, 30 x CDV small and large sepia cabinet - carte de viste photographs, 75 letters... I see quite a lot of the letters are written on Mounring paper..... With the black outer line.....

Had you had a death in the family.. You would send ALL letters with black lines around them... So I'm a little puzzled here...

You will see the pages have ALL got something stuck in them.. It makes the pages crinkle and go out of shape.. You can see on some pages where the years of dust and muck has gathered in the areas where the draft could blow in.. This is NORMAL for this type of scrap like book...

Buyers of this sort of items will know this is NORMAL.. Be aware it is NOT in mint flat condition... But again that is what we all know as being " RIGHT "...

This album is really TREMENDOUS and worthy of being in a MUSEUM or SERIOUS PRIVATE COLLECTION alike. There are items pasted to the pages... Small bits of paper with signatures and autographs... Some you will see are typical of the period...

The person that owned this book and stuck them all in COULD have been a relation of the Duke of Wellington... Or someone associated with his family.

Loose in the front is a print picture of Her Royal Highness THE DUCHESS OF KENT.. Also a blue bit of torn paper..

He is not on the Index. The dates cover from 1785 or so right thru to about 1882 or so I think... The early ones tend to be on the CUT King George signatures.. The MAJORITY are letters written in the 1860's - 70's really addressed to The Duke of Wellington.

So we are at the INDEX now... I only have space for 24 PHOTOGRAPHS on this listing..

These may well be HISTORICALLY IMPORTANT too... As a lot are addressed to The Duke of Wellington and are in relation to him sending people Invitations for a CONCERT & BALL on differant dates 1860 and 1873..

These letters are their replies to him....... Also I see on page 27 there are only supposed to be 2 items according the the Index on this page and there is a 3rd item.. Its a letter with the embossed address wording on the top BUCKENHAM HOUSE BRANDON.. The letter is signed by W BARING..

This applies the other way as well.. As I've just cross checked it.. There are 4 pages with more or less items on them than it says in the index....

I think the Index and pages numbered has been done at a later time... Maybe not even by the same original owner...

Anyway that does not really matter. Also I have noticed the name GURNEY. Typical of the period they have the embossed coloured address at the top..

It has a SCRAWLY signature... But the letter has been written by a differant hand.. This is due to the fact the King of Hanover was BLIND.. A small bit of paper also stuck in says he is stone blind, which of course only signed the letter... The LETTER is very interesting though...

And he is thanking the Duke for sending 2 original letters of the late King to the Dukes father and they were forwarded to him from a Baron... The contents of the letters were very valuable to him as they proved how clearly the King was aware of the Prussians policy towards her neighbours and how firmly he withstood every incroachment of that power against his kingdom and consequently that if he had lived in 1866 he would have acted as he had done. These letters are important besides their political importance, be always cherished by me and sacred relics, having been written to my late and ever lamented father to your father whose fame will never fade and since they were given to me by you, his son , who, as I know has in every way inherited his attachment to the Royal House of Hanover and its holy cause , I remain dear Duke , yours most sincerly....

Another letter is to My Lord Duke 1863... And its from Prince Frederick of Holstein in regard to the Dukes invitation to Her Majesties Birthday celebration.. He is unable to attend as hes otherwise committed. There is a letter with it... A letter dated 16th June 1860... From THE COUNT OF FLANDERS is on BUCKINGHAM PALACE headed paper... These may be of interest to some people too..... The Napoleon letter has CHISELHURST C MR 31 71 and a duplex mark over the one penny red LE EL. The envelope on page 9 from the Late Duke of Cambridge has red circle PAID FC then another line of wording and 1843... Also a circle in black with TOO LATE GPO..... And another circle in black? ETFORD JY 19 184 A. There is a 1 d penny red GT TG with a duplex 922 oval and it has a WORKSOP C AP 26 76....

Has a red circle LONDON OFFICIAL PAID L C 18 NO 75.... Another on a cut signature of LORD CRANWORTH says in a black circle..

And another of LORD WESTBURY has no stamp but a red circle with OFFICIAL PAID LONDON V JA 8 62. Page 31 has the famous Charles Dickens small photo cdv which has pencil wording below it Charles Dickens.... And on the opposite page his letter is interesting....

Dera Sir, I enclose you Mr Prescotts letter. I shall be glad to hear of any improvement in?? Please to take care that Mrs Hogarth has the?

(these last 3 words I dont understand quite)... With the really nice scribbly underlining he did.

The book is approx 7 and half inch x 9 and half ich x 2 and 1/4 inch deep. Please see close up pictures for more detail. The item(s) are shown next to an English 1 penny which is 20mm dia for scale. 2.5cm = 25mm = 1 inch. Once an item is the in the postal system any delays are out of my cont rol. See the date it was sent. Sent back to me in the condition you received it in. Get Images that Make Supersized Seem Small.

Tailor your auctions with Auctiva's. The item "Charles Dickens in 2nd Duke of Wellington Personal Autograph Photo Royal Album" is in sale since Thursday, December 21, 2017.

This item is in the category "Books, Comics & Magazines\Antiquarian & Collectable". The seller is "diggerlee" and is located in Yorkshire.