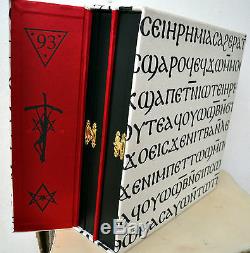 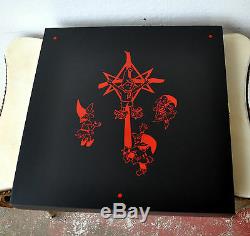 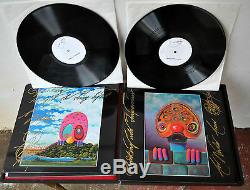 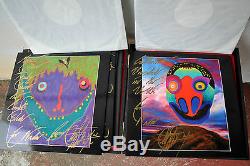 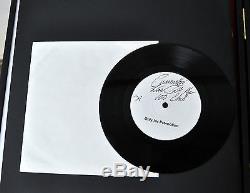 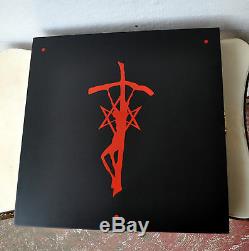 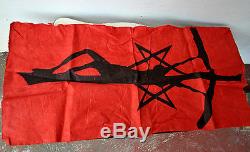 Current 93 TEST PRESSING 8 LP Box Set VOD 74, 74.5 & 75 Rarities, Unreleased... TEST PRESSING - Signed & Inscribed by David Tibet. Media - Mint cond (only played once). Wooden Boxes - Near Mint (one of the boxes has a broken clasp - which happened with many of the boxes). Cloth Covered Case (for the 2 boxes) - VG+, has some very light wear & soiling.

Extras - Near Mint (One of the inserts has a light gold ink transfers from one of the signed/inscribed covers - see the 11th photo - otherwise, all the extras are fine). This is the impossibly rare TEST PRESSING of the boxed set of Current 93 rarities & unreleased material, that was released in 2010, by Vinyl-On-Demand (VOD). Originally, being a Test Pressing, it would have been provided to the band, in plain white sleeves, with white labels, & not much else.

When auctioning this, David was able to provide most of the packaging, that went with the original release, so the 2 wooden boxes with red embossed artwork, and the cloth covered case, in which the boxes are housed, were all included. The booklets, inserts, handmade red paper poster, and 2 C93 badge pins were also included. In addition to the plain white sleeves, the beautifully printed record covers were also provided for all of the 12 LPs, and each cover was inscribed & signed by David Tibet, in a gold metallic pen. Being Test Pressings, the LP records are all pressed on black vinyl, and have blank white labels, with "Only for Promotion" printed on each record label.

But, David Tibet has hand-written the title of each record (on the'A' side), and also hand-written "Current 93" & "B", on each of the reverse label sides. The 7" single/EP, has the same labelling, as the 12" records, & the same hand-written inscriptions. Unlike the normal/or other editions (which were released on red vinyl), this has been pressed in Test Pressing fashion, on black vinyl, with white'promo' labels.

Obviously, a spare printed cover was not available for the 7, so it was provided just with a standard white sleeve. I think that covers most of what I know, about this extremely rare Test Pressing box set. If someone is willing to pay, we will have a deal. If not, I will be more than happy to keep this incredibly rare, & collectable set.

If other items should sell, & I no longer need the funds - I will withdraw this set from sale. This is an incredibly rare & magnificent, fully signed Test Pressing box set, and is a must have for any true hardcore Current 93 fan.

The LP titles & track listings are provided below, along with notes about the content of each box. Box 1 - Unreleased Rarities, Out-Takes, Rehearsals And Live 82-95. 4 × Vinyl , LP Vinyl , 7, Black Box Set , Compilation, Test Pressing.

Unreleased Rarities, Out-Takes And Rehearsals Vol. Falling Back In Fields Of Rape. The Sound Of Silence, Falling Back In Fiends Of Rape, Maldoror Is Dead, Raio No Terraus (Jesus Wept). When A Man Is Kicked He Often Kicks Back. Silence As Christine Under The Thunder Perfect Mind.

A Lament For My Suzanne. A Song For Douglas After He's Dead. The Fall Of Christopher Robin.

Father's In The Fields. The Innermost Light/ Patripassian Loop/ Greensleeves. In The Heart Of The Wood (And What I Found There). Unreleased Rarities, Out-takes And Rehearsals Vol. 3 (Live At The Loft, Tokyo, 20 December 1988). The Red Face Of God. Christ And The Pale Queens, Mighty In Their Sorrow.

The Sadness Of Things (Excerpt). Khor Ba'i Nyes dMigs. The Death Of The Corn.

Comes in a wooden box with a metal clasp. Box contains: 3 Albums (the first is a double album): -Christ and the Pale Queens Mighty In Sorrow plus The Red Face of God as a Double LP -As the World Disappears , released for the first time ever on vinyl -an official release of the Emblems LP, which has until now only existed as a test-pressing. "Emblems" was originally going to be a single LP of material that was only released on the 2CD compilation Emblems , but it never progressed beyond a very limited run of white vinyl test-pressings 1 Booklet of photographs In addition the first album contains a double sided insert.

Both box sets come with a Linen cover box to house them in. Check out my other items. I also have numerous other rare & signed Current 93, COIL, Nurse With Wound, Cyclobe, Throbbing Gristle, etc.

Releases available, and also have a rare signed copy of England's Hidden Reverse, signed by all the key members of Current 93, COIL & NWW. Be sure to add me to your favourites list.

As I will be listing many other Rare & hard-to-find books, artworks and many other items of interest. The item "Current 93 VOD 74/75 TEST PRESSING Signed D Tibet 8 LP Box Set Rarities + Extras" is in sale since Monday, December 15, 2014. This item is in the category "Music\Records".