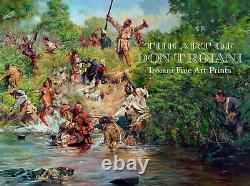 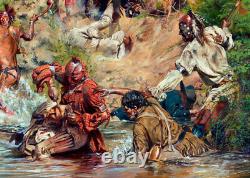 WE SUPPORT OUR TROOPS AND COUNTRY. THE ARTIST - Don Troiani DON TROIANI is a soul lost in time; a twentieth century artist to whom the life of the common soldier of the Civil War through the mid Eighteenth Century is as familiar and vivid as the surroundings of his Connecticut studio. While there are many other painters who have turned their attention to historical art, none have done so with the enthusiasm, insight and dedication of this accomplished recorder of drama and detail.

In the spirit of presenting historical truth through art, Don Troiani has personally set uncompromising standards of excellence and authenticity in his field that few others can equal. Models are chosen with the greatest care to achieve the proper look of the men in Colonial and Victorian America.

The garb and gear of each figure are painstakingly researched. Appropriate backgrounds are found and studied, sometimes sending the artist hundreds of miles from home to examine battlefields and structures firsthand. Because of the great amount of research that goes into one of his works, it is often years between a painting's conception and the actual moment the brush is put to canvas. "If an historical painting is not reasonably accurate, then it's worthless both as art and as a historical document, " Troiani declares.

If you are going to become involved in this field then there is little excuse for a pattern of inaccuracies. Indeed, Troiani's lifelong focus on America's military heritage enables him to present that subject with a credibility that surpasses his contemporaries. For a quarter century he has methodically built one of the great private artifact collections of Civil War, 1812 and Revolutionary War, World War II uniforms, equipage, insignia and weapons which he calls on to add the unique dimension of realism he is so well known for. An expert researcher with a personal Military library of over 2,500 volumes, he is assisted in his search for the truth by a select network of advanced collectors, curators and historians whom he corresponds with regularly and who open their own collections to him.

Hollywood has enlisted him as consultant on "Civil War Uniforms and Equipage" for the acclaimed feature film "Cold Mountain" starring Nicole Kidman, Rene Zellweger and Jude Law for which he received screen credit. Also in Cold Mountain, The Journey from book to film. " Troiani has also been military advisor(and made appearances) on the A&E and History Channel's "Civil Journal" and the miniseries "The American Revolution. Televison appearances on "Missing Reward", "Incurable Collector", and "Hunt for Amazing Treasures" are among his credits.

"Ensign Downing's Escape, The Battle of Wyoming, July 3, 1778" Don Troiani Limited Edition Print. A mixed force of Loyalists and Native Americans annihilated a force of militia on the banks of the. One of the few survivors was Ensign Downing of the 24. Connecticut Militia who although wounded managed to escape the slaughter by hiding in some. Here we see the victors driving the remaining Patriots into the river during one of the darkest days of the American Revolution.

At 78 years of age, Gabriel Cory was already a townsman of some celebrity in Milford, the seat of Pike County, Pennsylvania, on this cold Wednesday morning, January 23, 1833. As he lowered his right arm from giving sworn oath and was seated before the three justices of the court of common pleas, his gaze and mind sharpened. As required by the Pension Act of 1832, he was being asked to recount for the court the dates, places and key events of his service as a Revolutionary War soldier, now a half-century distant. After serving militia tours during 1776 and 1777 in his native New York and in New Jersey, he settled at Kingston on the Susquehanna River , opposite Wilkes-Barre, Pennsylvania.

This idyllic upper Susquehannas Wyoming Valley had been first colonized only during the prior decade by two combative factions of settlers from Connecticut and Pennsylvania. The outbreak of the Revolution found the Yankees in dominance, produced the designation of their martial contingent as the 24th Connecticut Regiment of Militia, and yielded their resolution to "unanimously join our brethren in America in the common cause of defending our liberty". As a rich granary and livestock source for Washingtons army, the valley concurrently drew the attention of the British command in Canada and, in particular, that of Major John Butler, director of the Indian Department at Fort Niagara. As the initial neutrality of the Iroquois Confederacy deteriorated, and while Butlers new Rangers Corps of Loyalists was formed, the valley became a primary target. During the early summer of 1778, as Gabriel Cory now testified the inhabitants of the valley of Wyoming received information that the Indians were preparing to make an attack on the people , and he was drafted for the term of four months as a private in the Pennsylvania militia.

About the first of July the Indians was discovered to be in the neighborhood of Kingston. Our commanding officers, Colonels [Zebulon] Butler and [Nathan] Denison, gave orders [on 3 July] to march against the Indians & Tories. After a march of about three miles the Indians met us and gave battle.

The American army counted of four hundred & forty men, that of the Indians & Tories of one thousand. After a severe and bloody engagement the Americans gave way having been nearly all killed.

Deponent had a brother in this engagement who was taken prisoner and, after having the Indians spears run through him several times, he was burned to death. After the retreat of the Americans he retreated on[to] an island in the Susquehanna River, where he was kept by the Indians for three days, they having surrounded the island, and while on the island one of his neighbors who had fled there with him was shot down by deponents side and scalped in his presence when asking for quarter. During this scene deponent lay concealed in a bunch of grape vines. Through extremely deficient reconnaissance plus bravado, the virtually untrained combination of Yankee and Pennsylvania militiamen were able to fire only three volleys before, at 100 yards distance, Butlers Rangers and Seneca warriors arose from lying flat on the ground, fired and charged from both front and flank. Near three-quarters of the militia were dispatched, while Major Butler reported a mere three killed and eight wounded, adding that five prisoners and 227 scalps were taken.

Given the circumstances, Ensign Daniel Downing, in the bushes at the far right, Private Gabriel Cory, and a few dozen others who escaped to fight another day were clearly among the wisest and luckiest of men. Also Available in the Following Formats. All Limited Edition prints are signed and numbered (S/N) by the artist and include a Certificate of Authenticity. Limited Edition prints are restricted to a certain number. For example, if 400 prints are made from an original painting, once theyre gone, thats it.

This status is noted on the print. Collectors prefer APs because their value increases even more than a Limited Edition as time goes by. A remarque is a pencil drawing done in the white border area of an art print. The subject of the remarque is usually determined by the artist. Each remarque is a piece of original art which adds to the value of the print by making that particular print unique and exclusive from the rest of the prints in the edition.

All Limited Edition artwork is subject to availability at time of order. The item "Ensign Downing's Escape, The Battle of Wyoming, July 3, 1778 Don Troiani Print" is in sale since Saturday, November 10, 2012. This item is in the category "Art\Art Prints".