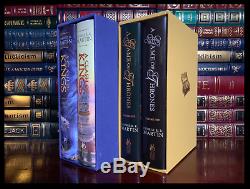 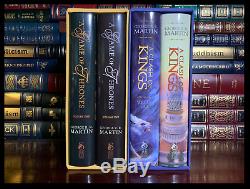 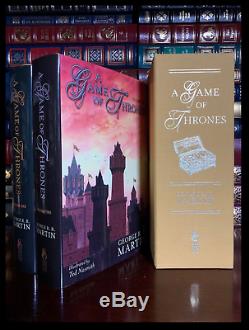 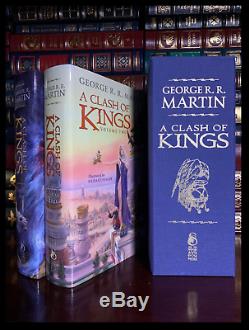 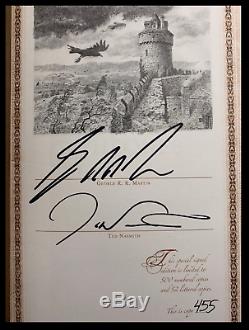 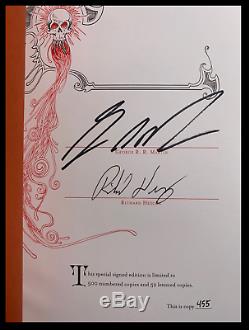 Subterranean Press A Game of Thrones & A Clash Of Kings. This is a like new Subterranean Press deluxe slipcased hardbacks with matching #455 limited edition set of A Game Of Thrones & A Clash Of Kings signed by George R. The story begins in Winterfell, the northernmost of the Seven Kingdoms, as the long, deceptively benign summer comes to an end. Eddard (Ned) Stark, lord of Winterfell, finds himself removed from the familiarand comfortingroutines of his life by an unexpected visit from King Robert Baratheon, his ruler and longtime friend. Robert offers Ned the crucial political position of Hand of the King, a position Ned does not want and cannot refuse. Against his will, he leaves his home and much of his family and travels south to the royal seat of power at Kings Landing. Once there, his lifeand the lives of everyone he cares for mostwill change in astonishing, often tragic ways. What follows is a wholly absorbing account of a struggle for power played out against a colorful, richly imagined landscape.

With a narrative mastery that is little short of amazing, George R. Martin patiently unfolds a sprawling fictional canvas that comes to seem more real and more vivid than the everyday world we inhabit. Encompasses moments of beauty and horror, loyalty and betrayal, desperate love and unmitigated cruelty, offering resonant images and memorable incidents on virtually every page.

It is the clear product of a master storyteller, a novelist of great ambition and seemingly limitless imaginative reach. Together with its equally ambitious successors, it stands at the very pinnacle of contemporary fantasy, and will continue to set the standard for a good many years to come. Concluded with the deaths of Robert Baratheon, ruler of the Seven Kingdoms, and Lord Eddard Stark, the embattled Hand of the King. Opens, war has broken out on a number of fronts and a bloody battle for possession of the Iron Throne has begun. In Kings Landing, the seat of royal power, Joffrey, Roberts sixteen-year-old heir apparent, rules the realm under the guidance of his mother, the beautifuland ruthlessQueen Cersei. Stannis and Renly Baratheon, Roberts brothers, have each established competing claims to the throne. And Robb Stark, Lord Eddards oldest son, has assumed the title of King of the North. Outside of the Seven Kingdoms, potent, often mysterious forces are gathering.

In the far north, Mance Rayder, the King Beyond the Wall, is marshaling his armies. To the east, Daenerys Targaryen, sole surviving descendent of an ancient dynastic line, is struggling to assemble an army of her own, an army supplemented by three impossiblebut very realdragons. The item "Game Of Thrones & Class Of Kings SIGNED GEORGE R. MARTIN Subterranean Press" is in sale since Monday, January 28, 2019.