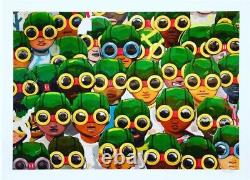 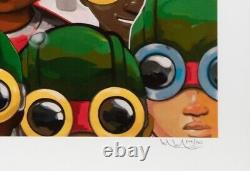 Hand-signed and numbered in pencil lower right, edition 109 of 130 plus APs. Artist Bio or Statement: Hebru Brantley was born and raised in Chicago. A product of the 80's, Brantley's early inspiration to create visual art derived from the cinematic Blaxploitation and science fiction depicted in the previous decade. His affinity for mythological comic book heroes, Japanimation, and graffiti has strongly influenced his work, and eventually, he began fusing elements of urban society with pop culture.

From that, he developed his own unique style: Afro-Futurism. Afro-futurism takes a multidisciplinary approach to visual art, layering youthful expression with human emotion, history, and the complexities and challenges of urban life. Brantley creates his work spontaneously and uses an array of mediums such as wood, found objects, spray paint, coffee and tea. While refining his craft, he earned his BA in Film in Atlanta and went on to design and illustrate for media production and clothing companies. From there, he began to transition from graffiti to canvas, making a name for himself in the contemporary art scene of Atlanta. He has since been privileged to show in Seattle, New York, Los Angeles, Chicago, Switzerland and more. Chicago continues to be Brantley's home base, but he enjoys the opportunity to work all over the country.

His work, represented by Timothy Yarger Fine Art in Beverly Hills, CA. Was recently shown at the 2012 artMRKT Fair in San Francisco and will be exhibited at Art Aspen and Platform LA.

This item is in the category "Art\Art Prints".collected" and is located in this country: US. This item can be shipped to United States.