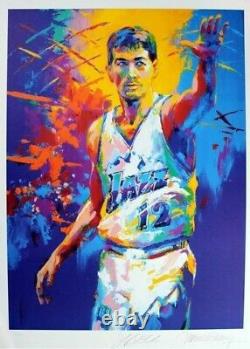 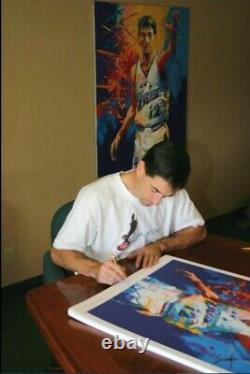 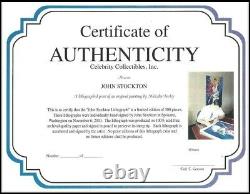 John Stockton autographed printed lithograph w/COA limited Edition (also autographed by artist). OWN A RARE PIECE OF NBA HISTORY. After 19 seasons with the Utah Jazz, John Stockton retired in May of 2003 concluding a spectacular career.

John was selected by the Utah Jazz as the 16. Overall pick in the 1984 NBA draft which also included Hakeem Olajuwon, Michael Jordan and Charles Barkley. In 1985, the Utah Jazz drafted Karl Malone and during their years together Stockton and Malone became the most consistently productive guard-forward combination in the NBA.

The lithograph was produced on 100% acid free, archival quality paper and signed in pencil to preserve its integrity. Each lithograph is numbered and is accompanied by a Certificate of Authenticity. Ideal for framing as it measures 23" X 34". This item is in the category "Sports Mem, Cards & Fan Shop\Autographs-Original\Basketball-NBA\Lithographs, Posters & Prints".

The seller is "watermelly101" and is located in this country: US. This item can be shipped to United States.