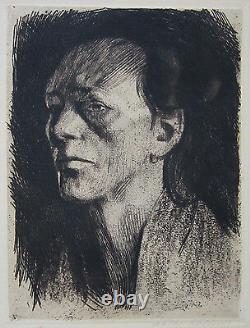 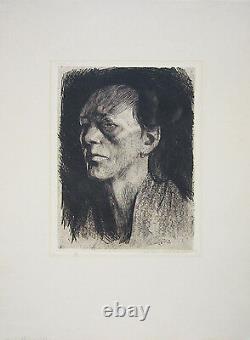 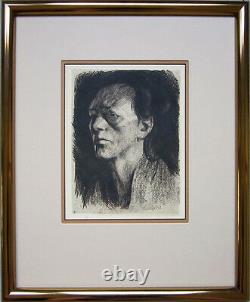 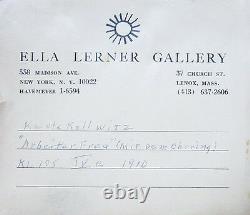 KATHE KOLLWITZ Signed 1910 Original Etching - "Arbeiter Frau (mit dem Ohrring)". This rare original vintage color soft-ground etching. Arbeiter Frau (mit dem Ohrring). 112IVb, 1910, Knesebeck's fourth (B) state (of 5), and is hand signed in pencil by the artist on the front lower right Kathe Kollwitz. It measures 17 ¼ x 23 ¾ (sheet), 9 ½ x 12 ½ (plate) and is matted and framed for a total size of 21 x 25 ½. It is in good condition aside from a line of toning around the mat window opening, a few specks of foxing and some creasing at the lower right sheet edge. PROVENANCE: Ella Lerner Gallery, 558 Madison Avenue, New York, N. Their original label affixed to the frame verso. CATALOGUE REFERENCES : Klipstein 105; Knesebeck 112IVb.

Kollwitz's art resounds with compassion as she makes appeals on behalf of the working poor, the suffering and the sick. Her work serves as an indictment of the social conditions in Germany during the late 19th and early 20th century. The daughter of a well-to-do mason, Kathe Schmidt was born in East Prussia.

Her father encouraged her to draw and when she was 14 years old she began art lessons. She attended The Berlin School of Art in 1884 and later went to study in Munich. After her marriage to Dr. Karl Kollwitz in 1891, the couple settled in Berlin living in one of the poorest sections of the city. It was here that Kollwitz developed her strong social conscious, which is so fiercely reflected in her work. Her art features dark, oppressive subject matter depicting the revolts and uprisings of contemporary relevance. Images of death, war and injustice dominate her work. Kollwitz was influenced by Max Klinger and the realist writings of Zola, and she worked with a variety of media including sculpture, and lithography. It may be argued that her work was an expression of her tumultuous life. Her personal life was marred by hardship and heartache. She lost her son to World War I and her grandson to World War II and these losses contributed to her political sympathies. Kathe Kollwitz became the first woman elected to the Prussian Academy but because of her beliefs, and her art, she was expelled from the academy in 1933. Harassed by the Nazi regime, Kollwitz's home was bombed in 1943.

She was forbidden to exhibit, and her art was classified as degenerate. Despite these events, Kollwitz remained in Berlin unlike artists such as Max Beckman and George Grosz, who fled the country. The item "KATHE KOLLWITZ Signed 1910 Original Etching Arbeiter Frau (mit dem Ohrring)" is in sale since Monday, August 24, 2015. This item is in the category "Art\Art Prints".