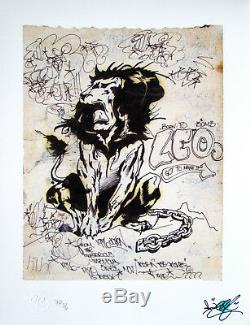 This limited edition has been created exclusively for the MCNY Museum and is published by DirtyPilot Editions. Each archival pigment print is signed and numbered in color marker by LEE Quinones. Measures 18" x 14", From a regular edition of 40. Lee Quinones is considered the single most influential artist to emerge from the New York City subway art movement.

He is a celebrated figure in both the contemporary art world and in popular culture circles, faithfully producing work that is ripe with provocative socio-political content and intricate composition. Lees paintings are housed in the permanent collections of the Whitney Museum of Art, the Museum of the City New York, the Groninger Museum (Groningen, Netherlands) and the Museum Boijmans Van Beuningen Rotterdam, Netherlands, and have been exhibited at the New Museum Of Contemporary Art (New York City), the Museum of National Monuments (Paris, France) and the Staatliche Museum (Germany). Lee painted his first subway piece in 1974. Inspired by the leading figures of subway lore including Cliff 159 of the 3-Yard Boys, and Blade One of the Crazy 5, Lee began creating whole 40-foot subway car murals in late 1975. By 1976, Lee was a shadowy legend, leaving his fervent mark in a voracious whole subway car campaign strewn across the #5. Over the next decade he would paint an estimated 115 whole subway cars throughout the. In late 1975, Lee was asked to join the Fabulous Five, an elite quintet of seemingly mythic graffiti writers. The Fabulous Fives greatest feat the only running 10-car train painted from top to bottom, end to end made its legendary journey in November 1976. Lee was instrumental in moving enamellist art above ground when he stealthily painted Howard the Duck, the first entire 25 × 30 foot handball court mural, in the spring of 1978 outside of his Corlears Junior High School #56. There are people who see the graffiti experience as a vocation of adolescence, the rites of passage without a sense of direction, says Lee. Im not surviving by offending it or defending it, but I saw it early on as a catalyst to develop as a painter and explore the other horizons outside of a forty foot subway car. The item "LEE Quinones Lions Den Limited Edition Printt, Graffiti, Not SEEN, COPE2" is in sale since Sunday, September 3, 2017. This item is in the category "Art\Art Prints".

The seller is "hobbsgallery" and is located in Wellesley Hills, Massachusetts. This item can be shipped worldwide.