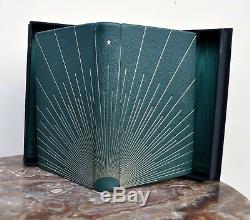 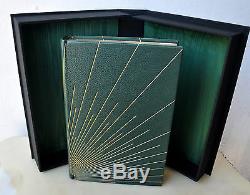 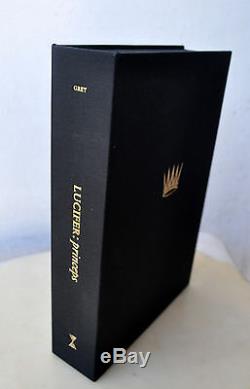 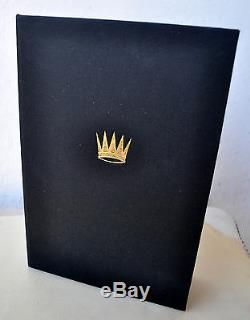 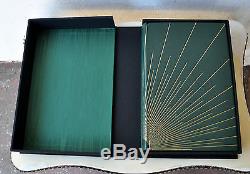 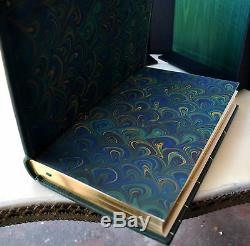 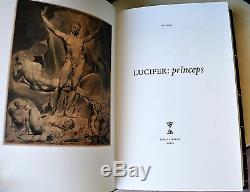 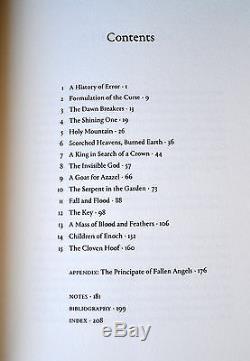 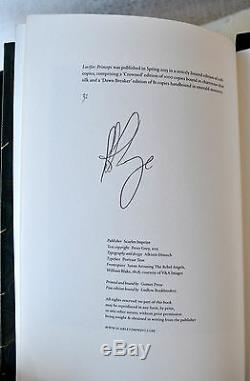 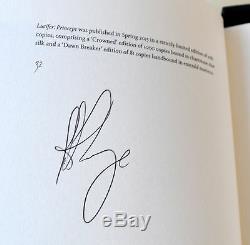 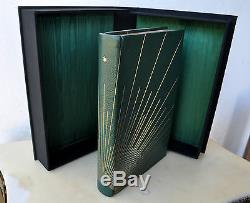 It is an amazing book, as are all the fine editions, published by Scarlet Imprint. This one has been pushed to a new level, and looks stunning.

Housed in a black cloth solander box, with gilt blocking to the front and spine - when you first open the box, you are in for an experience! The book is beautifully bound in full emerald morocco, with the Dawn Breaker rays blocked in gold, all page edges gilt, and custom peacock marbled endpapers. This fine edition was limited to 81 numbered copies. This copy is numbered #32, and has been signed by Peter.

The book is in mint condition, and will make an excellent addition to any serious occult library. Do not miss out, as this is only copy that I have available. From the Scarlet Imprint site. Is a seminal study on the origins of the Lucifer mythos by Peter Grey. It is the first in a two volume work; the companion volume.

Being an exposition of ritual actions, is due to be published in 2016. The fall of Lucifer, and that of the rebel angels who descended upon the daughters of men, comprise the foundation myth of the Western occult tradition. Is a study of origins, a portrait of the first ancestor of witchcraft and magic. In tracing the genealogy of our patron and prince, the principles that underlie the ritual forms that have come down to us, through the grimoires and folk practices, are elucidated. The study draws on the extensive literature of history, religion and archaeology, engaging with the vital discoveries and advances of recent scholarship, which render previous works on Lucifer, however well intentioned, out of date.

A concomitant exegesis of the core texts conjures the terrain and. Of the Ancient Near East, the cradle cultures and language of his nascence. Of critical importance are the effaced cultures and cults that lie behind the Old Testament polemics, viz.

Those of Assyria, Ugarit and Canaan, as well as Sumeria, Egypt and Greece; they provide the context that give meaning to what would otherwise be an isolated brooding figure, one who makes no sense without being encountered in the landscape. Intended to be the definitive text on Lucifer for the witch, magician and student of the grimoires. Spans wingtip to wingtip from the original flood myth and legends of divine teachers to the Church Fathers, notably Augustine, Origen and Tertullian. The tales of the Garden of Eden, the Nephilim, of the fall of Helel ben ahar and the Prince of Tyre, the nature of Azazel, and the creation of the Satan are drawn beneath the shadow of these wings into a narrative that binds Genesis and Revelation via the Enochian tradition. The story of the Serpent in the Garden and that of Lucifer are revealed to be a singular myth whose true significance had been lost and can now be restored.

It illuminates the path to apotheosis, and the role of the goddess as the transforming initiatrix who bestows the crown. A History of Error Formulation of the Curse The Dawn Breakers The Shining One Holy Mountain Scorched Heavens, Burned Earth A King in Search of a Crown The Invisible God A Goat for Azazel The Serpent in the Garden Fall and Flood The Key A Mass of Blood and Feathers Children of Enoch The Cloven Hoof Appendix: The Principate of Fallen Angels. Be sure to add me to your favourites list. As I will be listing many other Rare & hard-to-find books, artworks and many other items of interest.

The item "Lucifer Princeps Peter Grey Signed Fine Dawn Breaker Ed #32/81 Scarlet Imprint" is in sale since Thursday, September 10, 2015. This item is in the category "Books\Antiquarian & Collectible". The seller is "reix718" and is located in Belfield, NSW. This item can be shipped worldwide.