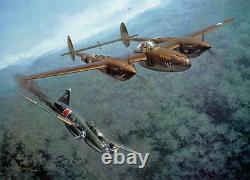 WE SUPPORT OUR TROOPS AND COUNTRY. THE ARTIST - Roy Grinnell. Oy, born in Santa Barbara, California, has been drawing airplanes ever since he can remember.

When he was not drawing them, he was building plastic models, a hobby he still passionately enjoys. When Roy graduated from Santa Barbara High School he decided to join the Navy where he was stationed in Guam. Thereafter, he attended the Art Center School of Design in Los Angeles where he graduated with honors. He moved to NYC where he was an Illustrator on Madison Avenue for several years.

Later on, he decided to become a free lance artist. This decision has led him in several interesting directions! Roy enjoys a diverse and varied background in the arts, and his unique talent has given him an incredible opportunity to express himself in his paintings whether the subject is aviation, western and Native American art, wildlife, illustration, impressionism and realism. When you view Roy's art, you will be amazed at his versatility.

As the Official Artist and Honoree of the American Fighter Aces Association, Roy has completed close to 50 original paintings for the AFAA, accurately portraying the aerial combat of aces from WW1, WW2, Vietnam and the Korean War. These paintings are based on the oral history of the aces involved, and as close as they can be to what really occurred as if someone was taking a photograph of the action.

Roy has won numerous art awards in both aviation art and western/Native American art. As a western artist, he was invited to join the Cowboy Artists of America. Roy's original paintings are displayed in museums and private collections including The Museum of Flight - Kenneth H.

Rex Barber, Frank Holmes and Ray Hine the designated "attack flight" turned to intercept the bombers. As they climbed toward the Bettys, Lanphier was three Zeroes diving to defend the bombers and turned sharply into the lead fighter, leaving Barber to continue the attack on the bomber. Curving in behind the lead bomber, Barber raked the descending Betty from wingtip to wingtip.

Thick black smoke began to stream from the right engine and the bomber snapped to the left. Moments later it sliced into the jungle, the crash site marked by a rising column of black, oily smoke.

Turning toward the coast, Barber finished off the second Betty now under attack by Frank Holmes, and downed a Zero that had belatedly joined the battle from nearby Kahili Airdrome. Shortly after, Mitchell called Mission Accomplished!

And fifteen Lightnings turned toward Guadalcanal. Ray Hine, last seen skimming over the water with smoke trailing from his engine, did not return from the mission and was never found. "Mission Accomplished" is hand signed by P-38 Ace 1st Lt. Barber, 339th Fighter Squadron, Thirteenth Air Force. Barber is credited with the shootdown of Yamamoto's aircraft on April 18th, 1943 over Bougainville, Solomon Islands. This lithograph is also signed by several P-38 pilots who were on the Yamamoto mission including Besby Holmes, Doug Canning, John W. Mitchell, Lou Kittel, Roger Ames, Jack Jacobson, Del Goerke, 9 signatures in all, and artist Roy Grinnell.

There is no limit to the number of open edition prints of a particular painting. Thats why Limited Edition prints are more expensive and more valuable to collectors than "open" edition.

Rare objects are more valuable. The term "giclee" denotes an elevation in printmaking technology. Images are generated from high resolution digital scans and printed with archival quality inks onto various substrates including canvas, fine art, and photo-base paper. The giclee printing process provides better color accuracy than other means of reproduction. The quality of the giclee print rivals traditional silver-halide and gelatin printing processes and is commonly found in museums, art galleries, and photographic galleries.

All Limited Edition artwork is subject to availability at time of order. The item "Mission Accomplished Roy Grinnell Print signed by Ace 1st Lt. Barber" is in sale since Tuesday, October 1, 2013. This item is in the category "Art\Art Prints".