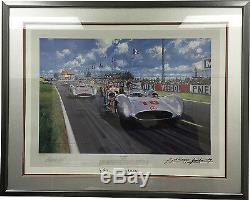 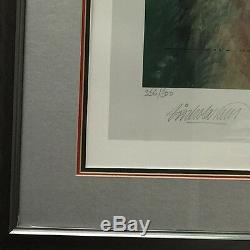 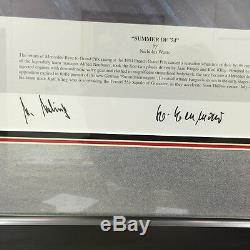 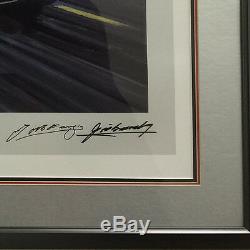 Powered by straight-eight fuel injected engines with desmodromic valve gear and clothed in magnificent streamlined bodywork, the race became a Mercedes demonstration as the opposition expired in futile pursuit of the German'Stromlinienwagens'. Eventual winner Fangio is shown in the early stages of the race leading his team mate Karl Kling, who is overtaking the Ferrari 553 Squalo of Gonzalez, as they accelerate from Thillois corner, July 4th 1954, Rheims.

Framed, matted and glazed with museum quality glass, this reprint is yet another brilliant s take on car racing history by Watts. And, it's ready to hang! Number 356/500, signed with a remarqued pictorial in pencil by the artist, Nicholas Watts.

Glazed with protective museum quality glass. Image Size: 26" x 17" (66cm x 45cm) / Overall Size: Framed: 36.5"x 26.5" (91cm x 66cm). This means no direct light and exposure to heat and humidity-And, this in turn means a better preserved print that has maintained it's original richness of color, paper quality and texture. For over three decades, world-renowned English artist and motor racing enthusiast, Nicholas Watts has used his talents as an artist and passion for racing - to thrill fans with rich and evocative scenes from the world's greatest car races. His work, which depicts defining moments in motorsport history is owned by many personalities, collectors and enthusiasts in the Racing, Classic and Exotic car arena.

His evocative scenes and compositions are highly prized for their historical accuracy and unmatched realism. More on the 1954 French Grand Prix. The long-awaited Mercedes W196 with its straight-8 fuel-injection engine made its debut with Juan Manuel Fangio transferring from Maserati to join an otherwise all-German line-up of Hans Herrmann, Karl Kling and pre-war driver Hermann Lang. It was a dominant return with Fangio recording a practice lap of 124.31 mph.

He and Kling led away and continued to race side by side around the Rheims track. The Ferrari drivers simply couldn't cope with the pace. José Froilán González retired after 12 laps and Mike Hawthorn's car blew up spectacularly.

Former Ferrari double World Champion (1952 & 1953) Alberto Ascari drove a Maserati, as the Lancia D50 was not yet ready for racing and lasted only 1 lap after starting on the outside of the front row. Herrmann set fastest lap before retiring, but Fangio and Kling continued their duel until the last lap when team orders were put in force and Fangio led Kling over the line by a mere 0.1 seconds-half a car length. Only six cars finished the gruelling race (Wikipedia). Yet another milestone set by legends in a legendary race and captured in remarkable storytelling fashion by Nicholas Watts - Make a home for this historic story. You won't regret it.

Thank you for stopping by! Check back with us often to see our new listings.

About Jacques Grelley and his Race Car Posters & Automobilia Collection : A professional racer and 1961 24-Hour Le Mans winner of his class -- Jacques passion for car racing and it's history led him to start actively collecting car racing art; posters and photography and other motorsport memorabilia in 1965. Quite a number of posters in the collection are signed by legends and friends; juggernauts in auto sports like Carroll Shelby, Stirling Moss, Juan Manuel Fangio and Maurice Trintignant. Many of the iconic images in his Collection are a collector's dream and familiar to even the most casual of fans.

His now classic collection represents an array of original art work that depict scenes that span the Golden Age of motorsports. The item "Nicholas Watts Summer of 54 Signed Fangio Limited Edition Print 31x35" is in sale since Saturday, January 30, 2016. This item is in the category "Art\Art Prints". The seller is "racingcarsposters" and is located in Arlington, Texas.