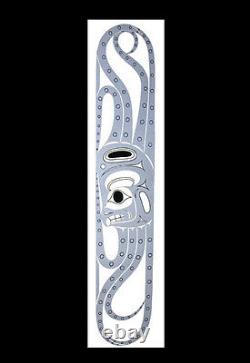 This listing is for one signed, limited edition, new, unframed silkscreen print by Native American First Nations artist Derek Wilson. Measuring 22" tall by 8" wide, each print is numbered and is from a total edition of 175. This format is incredibly versatile, as it can be hung in a wide variety of spaces.

Commonly referred to as Devilfish, the Octopus is a secondary crest figure but is central to many myths along the Northwest Coast. The Octopus has close links to shamanism and transformation symbolism due to its ability to change colour and shape. Derek's crest was Killerwhale and he was Haisla.

Derek used a variety of materials, working in wood, silver, gold, copper, ivory, gemstones and silkscreen. Beginning in the late 1950's, Derek and his brother Barry Wilson would finish off the pieces that their uncle Henry Robertson would discard. Encouraged by David Gladstone and Russell Smith, Derek started to work with gold and silver. His designs were influenced by his Tsimshian and Haisla background.

Derek had work displayed at the Museum of Anthropology in Vancouver. In 1981, the Queen of England received a gold ring from Derek as a representative gift from the visiting First Nations. From 2004 to 2006, Derek helped his uncle Henry Robertson oversee the recreation of the nineteenth-century Gpsgolox pole that was made for the country of Sweden as part of a repatriation deal between Sweden and Canada. Derek was also featured in the NFB documentary'Totem: The Return of the Gpsgolox Pole'.

In 2008, Derek helped teach and advise the students of Vancouvers Northwest Coast Jewellery Arts Program. This program was started in 2007 by Haida/Kwakwakawakw artist Dan Wallace. Derek, along with his brother Barry, were among the most versatile and creative jewellers working in the market.

Their use of uncommon imagery, inlay work, overlay and atypical formats set them apart. Derek passed away in 2011. The item "Northwest Native American Octopus Print Minimalistic Signed Ltd Ed New Devilfish" is in sale since Saturday, September 13, 2014. This item is in the category "Art\Art Prints". The seller is "artfromabove" and is located in Vancouver, British Columbia.

This item can be shipped to United States, all countries in Europe, Canada, Japan, Australia.