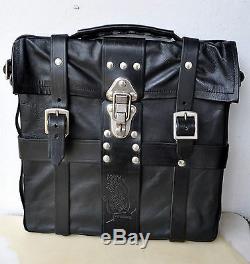 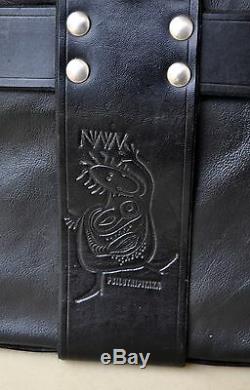 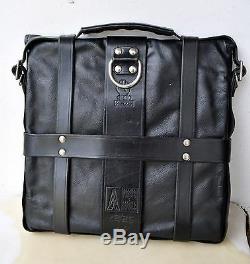 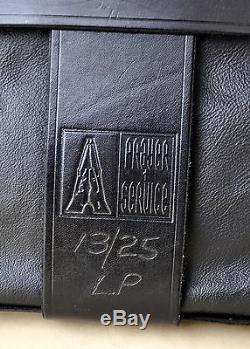 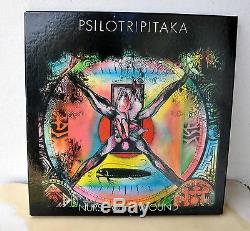 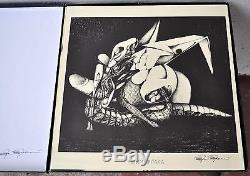 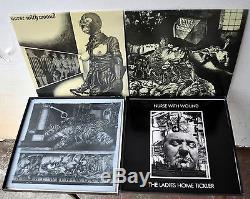 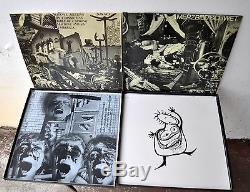 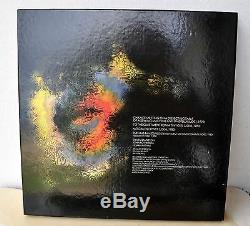 Only 25 sets were produced, and the first 3 copies were retained by Hamish Halley, Steven Stapleton, and David Tibet; so only 22 sets were actually released. This one is numbered #13 of 25, with the limitation number carved into the leather at the back. The thick wide strap at the front is embossed with the NWW logo, and the Psilotripitaka title. The Psilotripitaka box contains 4 NWW LPs: Chance Meeting.... ", "To the Quiet Men From a Tiny Girl", Merzbild Schwet" and "The Ladies Home Tickler".

The first 3 LPs all come with inserts. The 4th LP/EP was issued without an insert.

So the box's lid has been signed by Steven Stapleton, as has the Psilotripitaka art print insert. Do not miss out on this very rare opportunity.

These never come up for sale! Chance Meeting On A Dissecting Table Of A Sewing Machine And Umbrella. The Six Buttons Of Sex Appeal. Blank Capsules Of Embroidered Cellophane. To The Quiet Men From A Tiny Girl. She Alone Hole And Open. Limited release of the standard Psilotripitaka LP box set in a leather'bondage' bag designed and crafted by Hamish Halley. Issued in an edition of 25 individually numbered copies, the first three of which all being numbered 1/25, one of each retained by Halley, Steven Stapleton, and David Tibet, the remaining edition numbered 4/25 - 25/25. The edition number is carved into the reverse of the bag.

Covers no longer black on white, but black on yellow (UD01), blue (UD03), green (UD04) respectively, each of these releases having an insert. Also contains The Ladies Home Tickler 12 (UD00) without insert.

A further fourth insert found in all versions of the Psilotripitaka box is included. Matrix / Runout (Side A): UD0 0LP A1 - A Porky P...

I also have the original CD release of Visitors (which has also been signed), as well as Art Editions of the Wounded Galaxies.... CD available, as well as other artworks, prints & rare releases by Ossian Brown, Cyclobe & COIL. I also have other rare limited edition prints available by Current 93, including the sister print to this one: "I Arose As Aleph, The Speller, The Killer", as well as numerous posters, and other signed prints. I also have a number of prints by Cyclobe, Nurse With Wound, COIL, etc.

And also prints released by Three Hands Press, including Daniel Schulke's "The Theriomorph", a larger-scale letterpress print, and also have a number of the last remaining high quality prints of Andrew Chumbley's. I also have numerous rare & out of print book titles, currently listed, with more to come. Be sure to add me to your favourites list.

The item "Nurse With Wound Psilotripitaka Bondage Edition Signed #13/25 4LP Box Set RARE" is in sale since Tuesday, November 22, 2016. This item is in the category "Music\Records".