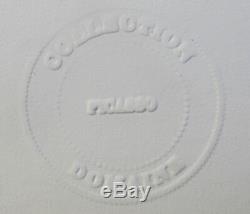 This piece is pencil signed on the lower right as'Collection Domaine Picasso' and has an embossed seal stamped by the Picasso Estate. Pencil numbered from an edition of 500. Paper measures 20" x 47". Image measures 16.5" x 44". Published on thick quality archival paper.

In excellent condition, comes unframed. Comes with a certificate from the Picasso Domaine Collection. Pablo Picasso's Guernica was painted as a reactionary representation of bombing of Guernica in the Spanish Civil War.

Pablo Picasso remained neutral during the Spanish Civil War, World War I and World War II, refusing to fight for any side or country. Pablo Picasso never commented on this but encouraged the idea that it was because he was a pacifist.

Some of his contemporaries though (including Braque) felt that this neutrality had more to do with cowardice than principle. As a Spanish citizen living in France, Pablo Picasso was under no compulsion to fight against the invading Germans in either world war. In the Spanish Civil War, service for Spaniards living abroad was optional and would have involved a voluntary return to the country to join either side. While Pablo Picasso expressed anger and condemnation of Franco and the Fascists through his art he did not take up arms against them. He also remained aloof from the Catalan independence movement during his youth despite expressing general support and being friendly with activists within it.

No political movement seemed to compel his support to any great degree, though he did become a member of the Communist Party. During the Second World War, Pablo Picasso resided in Paris when the Germans occupied the city. The Nazis hated his style of painting, so he was not able to show his works during this time. He retreated into his studio, continuing to paint all the while. While the Germans outlawed bronze casting in Paris, Pablo Picasso was still able to continue because of the French resistance who would smuggle bronze to him.

Arguably Pablo Picasso's most famous work is his depiction of the German bombing of Guernica, Spain Guernica. This large canvas embodies for many the inhumanity, brutality and hopelessness of war.

The act of painting was captured in a series of photographs by Pablo Picasso's most famous lover, Dora Maar, a distinguished artist in her own right. Guernica hung in New York's Museum of Modern Art for many years. In 1992 the painting hung in the Madrid's Reina Sofía Museum when it opened. After the Second World War, Pablo Picasso rejoined the French Communist Party, and even attended an international peace conference in Poland. But party criticism of a portrait of Stalin as insufficiently realistic cooled Pablo Picasso's interest in Communist politics, though he remained a loyal member of the Communist Party until his death. His beliefs tended towards anarcho-communism.

The item "Pablo Picasso GUERNICA Estate Signed Limited Edition Large Size Giclee Art" is in sale since Tuesday, April 3, 2018. This item is in the category "Art\Art Prints". The seller is "forgottentreasurez" and is located in Sherman Oaks, California. This item can be shipped worldwide.