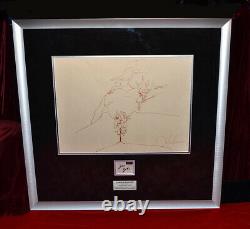 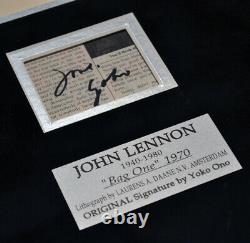 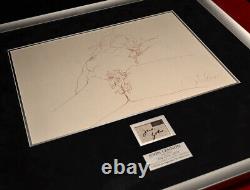 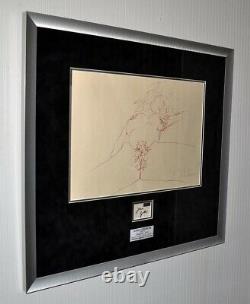 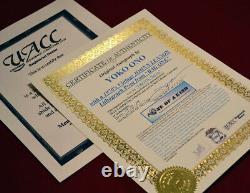 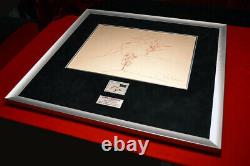 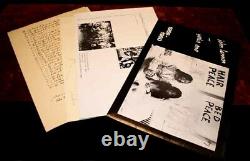 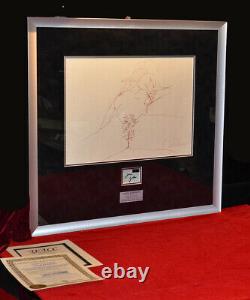 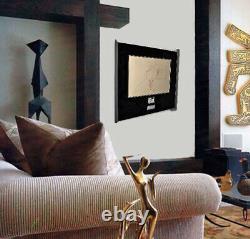 This is the very RARE large Lithograph that measures approximately 20" Long x 14.5" High... The more common lithos are the smaller versions that measure 8.75" High x 12" Long.

This is a black line art litho print. This item is NOT hand-signed by Lennon. It DOES, however, include the ORIGINAL SEPARATE MATTED SIGNATURE of YOKO ONO that she signed. This original Fine Art Litho is museum matted in a beautiful custom silver metal museum quality frame with (non-breakable) UV Acrylite Museum Glass using acid-free materials...

The Complete "BAG ONE" set included fourteen lithographs, each measuring 51 x 37 cm (20 x 14.5 in). Seven were black & white: marriage,'bed-in' & poem; seven were erotica. Please note this Litho is not from the 1970 hand-signed set, but it is from the famous 1st edition 1980 LITHOGRAPH SET with the printed Lennon signature that were published & license.

These LARGE SET OF LITHOS are very hard to find in today's marketplace! They came in it's original'Bag One' cardboard folder and inner tray.. You DO NOT get the FOLDER or TRAY or TITLE SHEET pictured here.. This LARGE LITHOGRAPH is in NEAR MINT CONDITION..

This display is Museum double matted in a beautiful, large custom design metal Frame... All under UV Acrylite Glass.. A Great MUSICIAN, A Great ARTIST...

A Beautiful LITHOGRAPH, Plate Signed ART, Original YOKO ONO SIGNATURE, Museum Framed & Ready to Hang or display in your Home, Museum or Office. As a TV & Movie DIRECTOR and a lifetime member of the Director's Guild of America, D.

YOKO ONO's separate original SIGNATURE is framed & matted under the Larger Size Lithograph.. YOKO ONO's original signature is in very good condition and is guaranteed genuine for life by UACC RD#228 with the COA.. Attached to the matted piece is this beautiful engraved plaque attached to the matte that reads.

The beautiful professionally Framed piece measures approximately 28" x 26"... This JOHN LENNON Art Print & YOKO ONO Signature is just ready to hang on your wall and display in your home or office.

This original artwork is in good condition with minor aging, printed on one side only... The MATTED Lithograph shows approximately 18" x 13" with the signature of John Lennon in facsimile signed in plate... Under the matte, the entire lithograph measures approximately 20" x 14.5"... John Lennon's Bag One Portfolio is a series of fourteen original lithographs that were given to Yoko Ono as a wedding gift to celebrate their marriage and subsequent honeymoon in Amsterdam at the Hilton Hotel in 1969...

On the second day the exhibition was closed by Scotland Yard and the erotic lithographs confiscated. This exhibition caused quite a controversy as to whether these lithographs were art or pornography, and eventually the art was confiscated by Scotland Yard while on exhibit in London. John was later exonerated by the British courts. These lithographs are on permanent display at the Museum of Modern Art in New York City and sought after by the most discriminating of art collectors. Art was actually Lennon's first love. He began drawing long before he had a guitar, then attended the prestigious Liverpool Art Institute for three years (1957-60) before the Beatles became a full-time occupation. He continued to draw throughout his life.

Yoko's also been regarded as an important contemporary artist, a key player in conceptual art, performance art and the Fluxus group. Plus, she's known as a champion of her late husband's legacy, as well as a high-profile advocate for peace. In fact, Lennon first met Ono at an art exhibition of hers.

Their first interaction is well chronicled: In November 1966, Lennon bemusedly walked around an average-looking apple on a pedestal priced at 200 pounds, then he climbed up a ladder and looked through a spyglass pointed toward the ceiling. What he saw was the word "yes, " scrawled on a piece of paper. "It's so amazing, " said Ono, who was born in Tokyo, Japan in 1933. She permanently moved to the U. In hindsight, it seems almost like a planned thing.

I just exhibited that work. But it seems like I was saying'yes' to John. Yoko's original signature is matted under the piece of art featuring her that was drawn by John to make for a beautiful display.. I hope this helps you make a good investment. Hello Jack, our Gorman has already arrived and is hanging on a brand new wall. She is perfectly beautiful and the frame is perfect for my room. Let's keep in touch. Thanks for your ideas and emails. JOHN LENNON is considered by many critics to be one of the best musicians/composer/artist of the 20th century. This could be a Great Investment! "EROTICA" is a Great Original 1980 Original Limited Edition Fine Art Printed LITHOGRAPH signed in plate by John Lennon featuring John and his wife, Yoko Ono... With the Original Yoko Ono Signature matted underneath the Litho. "EROTICA" was removed from this rare BAG ONE Suite released by Lennon in the 1970's...

This Lithograph was licensed & published in 1980 by Laurens A. Check out our other auctions for great art, memorabilia, movie props & autographs...

Check out our other auctions for more great items, including more Art, Props, Autographs, Costumes & More! If this autograph is declared not to be authentic, we may ask the purchaser to supply the full written opinion of one competent authority acceptable to us. Sell is a Registered Dealer with the U. We are proud that some of our memorabilia was displayed in the Smithsonian, Washington, D. Heimdell51 Praise: Great guy; very prompt & efficient service & exc.

Circus10 Praise: Fabulous costume, vintage RBBB. Belfast Praise: Wonderful Ebayer & with genuine COA's too! Artwork, Autographs & Props are becoming one of the fastest growing assets in the world..... A real "One of a Kind" FIND and conversation piece! This is a rare, one of a kind ORIGINAL Limited Edition Fine Art LARGE SIZE Lithograph by this famous Musician & Artist, JOHN LENNON, that was licensed & published in 1980 by Laurens A. Acid Free Materials were used to assemble this collection in a new silver metal frame with black suede and silver mattes with acrylite glass (non-breakable). A GREAT piece of ART & SIGNATURE that you will rarely find in the marketplace.

The item "RARE John Lennon BAG ONE Art LITHOGRAPH, Signed YOKO ONO, Museum Frame, COA UACC" is in sale since Saturday, September 14, 2019. This item is in the category "Art\Art Prints". The seller is "jackmsell" and is located in New Port Richey, Florida. This item can be shipped worldwide.