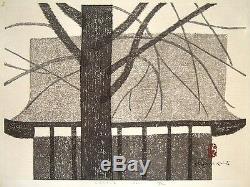 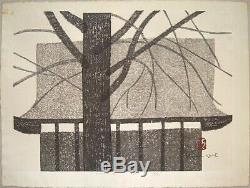 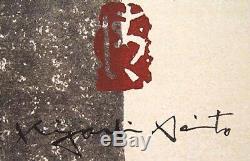 In 1938 he issued his first prints in his now famous "Winter in Aizu" series. After steadily gaining recognition, he won first prize in 1951 at the. International biennial exhibition for his print called "Steady Gaze, " where it won over both prints and paintings. Saitô admired Piet Mondrian and some of his views of buildings and temples seem to display that influence in their simplified forms. Saitô's prints have been especially popular in the west, although his works are appreciated in.

Saitô worked primarily in the woodblock medium, while also producing works in calligraphy, dry point, and color and ink paintings ('suiboku ga'). He carved his images into blocks of various woods, either solid katsura or plywood faced with katsura, rawan, yanagi, keyaki, shina, or lauan, to obtain a wide range of textures.

In some cases he used only one block for all the colors in a design, while for others he needed as many as 5 or 6 different blocks. This rare original color woodblock print is entitled "Castle" and is signed in black ink by the artist on the image lower right. It is also inscribed in pencil with the title, dated "1962" and numbered "68/200", from the total limited edition of only 200 impressions. It is printed on rice paper with the artists watermark and with full margins.

Virtuoso use of the grain in the woodblock medium is characteristic of Saito's best work; this, combined with a composition of contrasting open space and solid shapes, colors both muted and bright, make this a fascinating print. It is in good condition aside from a few specks of foxing, a crease in the right margin, and tape remains in the corners with associated yellowing. It measures 17 ¾" x 23 ¾" (sheet), 15 ¼" x 20 ¾" (image) and is unframed.

The item "Rare KIYOSHI SAITO Signed 1962 Original Woodblock Print Castle" is in sale since Saturday, August 22, 2009. This item is in the category "Art\Art Prints". The seller is "skf-fineart" and is located in Los Angeles, California. This item can be shipped to North, South, or Latin America, all countries in Europe, all countries in continental Asia.