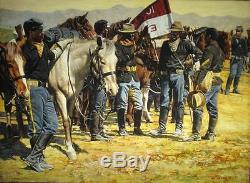 He also created several equine sculptures when he couldn't get the exact pose he needed from photographs. These have been bronzed and his family hopes to be able to offer reproductions in the future. Don passed away on November 5, 2009 at the age of 83. "Ready for Ten" Don Stivers Numbered Limited Edition Signed Print. They fought with as much pride as any soldiers who have ever marched under the American flag.

This tribute to the African-American soldier depicts the Buffalo Soldiers preparing for a ten-day campaign against the Indians. The ride would be hazardous, trying, and exhausting, but in the end the men would-then as now-succeed and prevail. All Limited Edition prints are numbered and include a Certificate of Authenticity.

If the Limited Edition is 400 s/n, there would be 40 APs. This status is noted on the print. Collectors prefer APs because their value increases even more than a Limited Edition as time goes by. All Limited Edition artwork is subject to availability at time of order. The item "Ready for Ten Don Stivers Signed Limited Edition Print Buffalo Soldiers" is in sale since Thursday, May 28, 2015.