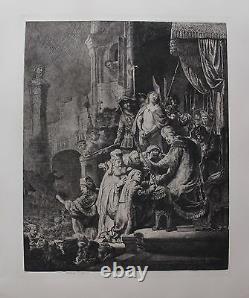 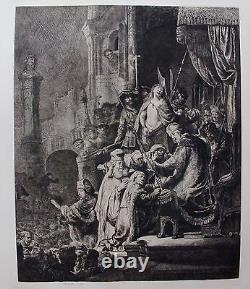 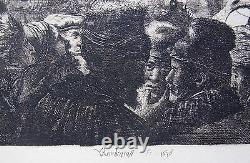 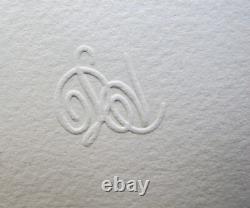 This is a beautiful etching, after Rembrandt, by master engraver Amand Durand. Titled "Christ Before Pilate: Larger Plate" (year of original 1636). Measurements: image size is 21" x 17". With border measures 26" x 22". Signed and dated in the plate. This etching bears an Amand Durand embossed blind stamp chopmark. This subject is in excellent condition, and has never been framed.

Comes with a certificate of authenticity. Rembrandt was born in 1606 in Leiden , Holland. Before his 30th birthday, the name Rembrandt had become synonymous with artistic excellence. The Dutch master was known worldwide for his highly prized series of classical etchings. These images are known for their delicacy of tone and intricacy of detail.

The family faithfully honored the binding agreement. Owing to their great popularity and soft metallurgical consistency, the original plates became worn by the mid 1800's. To save these genius-inspired works, Amand Durand, a master engraver, born in France in 1831, spent the major part of his career exactly duplicating the genius of Rembrandt onto hard, lasting copper plates. Art historians and critics have been stunned by the incredible quality Durand achieved through his own technical genius. Historical references indicate that Armand Durand's amazing skills were well known to expert of the 19th and early 20th centuries.

Many esteemed art critics and curators feel that Durand's works not only do great justice to Rembrandt's original concepts but subtly improve on the legendary Dutch master in a technical sense. Amand -Durand was a great admirer of Rembrandt. He desired to study the plates and techniques of this genius. Unfortunately at the time there only remained about 100 known plates, which were available to produce fine quality impressions. For 100 years the bulk of Rembrandt's plates were shrouded in mystery. As time moved on some of Rembrandts plates began to surface. By this time Rembrandts plates were miserably worn and dull. Amand-Durand, who by now had made the ranks of a noted engraver, decided to remedy this with his own gifted talents.

He researched and intensely studied pieces that were available only in collections. From here on he spent the major part of his life exactly duplicating Rembrandts images onto copper plates. These recreations were called Amand-Durands after Rembrandt.

Their unbelievable clarity and exactness were achieved because Amand-Durand used as his guide, not the worn and dull plates, but the first and second state etchings of the masters original works. By this time Durands talent were known to experts of the 19th and 20th centuries. In 1855, Conservator of the Cabinet de Estampes, George Duplessis so appreciated the genius of this man that he had his work published in books which belong to the Bibliotheque Nationale in France. Amand-Durand was used as master etcher in an anthology of European engravings, which became so valuable that they were kept under locked scrutiny in most libraries. What we have is a noted master duplicating a master some 200 years later.

Soon after Amand-Durands death in 1905, his original copper plates were obtained by the prestigious French book publishing family, DOMINIQUE VINCENT et Cie. They mainly published the work for book illustrations to the Bibliotheque Nationale and the Louvre Museum as beautiful exact duplications of Rembrandts etchings. It was this reproducing that caused hushed rumor that spread throughout the entire art world. It was discreetly rumored among noted art circles, that in the early 1900s numerous Amand Durand after Rembrandt etchings found their way into famous collections much to the dismay of many. This was the rumor until 1985.

An American art dealer doing research on the availability of Rembrandt etchings came across some so questionably perfect that he decided to research even further. Fierce studying proved that these were in fact Amand-Durand etchings that had been rumored and gossiped about for so many years. Completely aware of what information he and come across and the problems that developed when they were placed in the wrong hands, he resolved to locate the original copper plates.

This took quite some time. However with unbelievable resourcefulness he was able to locate the Dominique Vincent family who had been completely unaware of the stories that were inadvertently created with these prints.

The Bibliotheque Nationale and the Louvre Museum in Paris had been acquiring these etchings to allow the French to see the unimaginable story behind them. This allowed the American public to also see this unimaginable story of how a noted artisan through his talent and dedication for the great master Rembrandt, created effects of such quality that the repercussions were felt throughout the entire art world for many, many years. Over a century after Amand-Durand painstakingly recreated Rembrandts etching, the benefits of his devotion to quality and beauty are again felt throughout the art world.

The piece was made from the re-worked original copper plate by Amand Durand in the late 1800s. The item "REMBRANDT CHRIST BEFORE PILATE Amand Durand Plate Signed Art Etching" is in sale since Friday, July 24, 2015. This item is in the category "Art\Art Prints". The seller is "forgottentreasurez" and is located in Sherman Oaks, California. This item can be shipped worldwide.