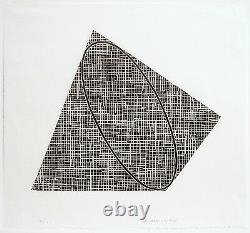 Woodcut printed on Mulberry paper. 17 x 18 3/4 in. / 43.2 x 47.6 cm. Robert Mangold is frequently associated with Minimalism, and known for his monochromatic paintings and meditative, geometric canvases.

His first solo exhibition in New York galleries in the mid-1960s marked the development of his Minimalist style, in large, monochromatic works. Mangold's work typically explores properties of illusion in painting; these early work were often painted in varying lighter and darker tones, producing different perspectival effects, or they were covered in thick layers of paint to mimic the surrounding gallery walls. He later experimented with shaped canvases, painting sections of circles, rectangles, and frame-shaped works, in pieces that blurred the lines between painting and object.

Throughout his career, Robert Mangold has received much critical acclaim. We warrantee and represent that the goods are as described in the above listing. We specifically disclaim any implied warranties of title, merchantability, fitness for a particular purpose and non-infringement. Customers should satisfy themselves that any item choice made is suitable for their intended purpose or use. We pride ourselves on our customer service.

This item is in the category "Art\Art Prints". The seller is "brooke-alexander-gallery" and is located in New York, New York.