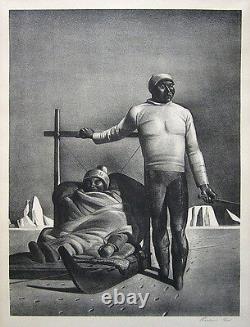 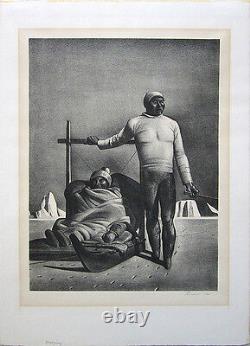 ROCKWELL KENT Signed 1933 Original Lithograph "Sledging" (Greenland Travelers). This rare original lithograph is entitled Sledging (Greenland Travelers) , (Burne-Jones 99), and dates from 1933. It is signed in pencil by the artist on the front lower right Rockwell Kent and is from the total limited edition of 125 signed impressions.

It is also titled in pencil on the lower left. It measures 11 ½ x 16 (sheet), 8 5/8 x 11 ½ (image), and is unframed. It is in good condition aside from toning at the mat opening and tape on the upper sheet edge verso from hinging.

PUBLISHED : Harper's Magazine, September 1933; and in the special Rockwell Kent issue of the American Book Collector, Summer 1964. Rockwell Kent, artist, author, and political activist, had a long and varied career.

Kent's paintings, lithographs, and woodcuts often portrayed the bleak and rugged aspects of nature; a reflection of his life in harsh climates. Kent had an unusually long and thorough training as an artist. He was a student at the Horace Mann School in New York City and subsequently studied architecture at Columbia University, toward the end of which he felt a strong inclination toward painting and took up the study of art under William Merritt Chase at the Shinnecock Hills School. He studied later at the New York School, under Robert Henri and Kenneth Hayes Miller, and finally as an apprentice to Abbott Thayer at Dublin, New Hampshire.

Henri encouraged him to go to Monhegan Island where Kent painted on his own. Among his other works were Voyaging Southward from the Strait of Magellan (1924); Salamina (1934) about Greenland; and two autobiographies, This is My Own (1940) and It's me O Lord (1955). The graphic art tradition in which Rockwell Kent worked was not that of the Post-Impressionist or abstract International style, but rather an older and somewhat English style.

Hogarth, Blake, Constable, the Pre-Raphaelites, and the British illustrators were his artistic antecedents. His work is most frequently identified with that of the American Social Realists and the great muralists of the 1920s and 1930s.

Kent's figure-studies show with what perseverance he worked to perfect his draftsmanship and his ability to portray the human form in any pose or manner; his architectural training enabled him to draw objects accurately and convincingly. Kent stands out in American art in his use of symbolism.

Humanity was the hero in most of his prints, which are symbolic representations of certain intuitions about life's destiny and the meaning of existence. The fact that Rockwell Kent never worked in the tradition of the Post-Impressionists had considerable effect on critical and public response to his work. In the 1920s, he was a rising young printmaker; and in the 1930s, he reached his greatest popularity. In 1936, the magazine Prints conducted an extensive and elaborate survey on the practitioners of graphic art in the United States.

Kent came out far ahead of all others as the most widely known and successful printmaker in the country. The item "ROCKWELL KENT Signed 1933 Original Lithograph Sledging (Greenland Travelers)" is in sale since Wednesday, May 7, 2014. This item is in the category "Art\Art Prints". The seller is "skf-fineart" and is located in Los Angeles, California. This item can be shipped to North, South, or Latin America, all countries in Europe, all countries in continental Asia.