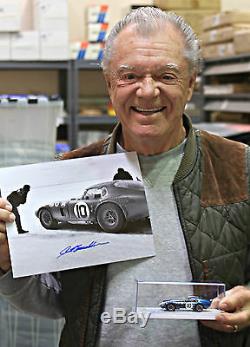 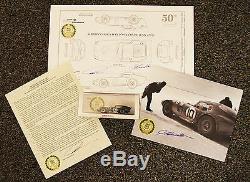 Besides the fact that Peter Brock worked with Truescale Models to ensure the accuracy of this special car/model, what makes this model set very special are the accompanying documents (details below). First lets talk about the history of CSX 2887. It was the first Daytona Cobra Coupe built, and the only Coupe built at Shelby American under Peter Brocks direction. It also however has the distinction of being the first Coupe to win a race (Sebring'64) and also the last to compete on the world stage, on the pure white saline expanse of the Bonneville Salt Flats in Utah in November of 1965. At Bonneville it once again made racing history setting 23 FIA speed records including a 12 hour endurance run on a 10 mile circular course, averaging 150 miles per hour, including fuel stops!

Due to this amazing history, CSX 2287 was the first car chosen by the Historic Vehicle Association and U. Department of the Interior to be recorded in the American Engineering Record (HAER) and the HVAs National Historic Vehicle Register. This leads us to what is so very special about this model package: It includes a copy of the schematic/plot diagram that was made of CSX 2287 as part of the Secretary of the Interiors Standards for Heritage Documentation (this is the large white document seen in the picture above). This schematic is kept in the Library of Congress and now you will have your very own copy as part of this model package and even better it is numbered and signed by designer Peter Brock and Land Speed Record driver Craig Breedlove!

The model set contains the following items, with each displaying a matching numbered seal e. Model: This amazingly accurate and detailed 1:43rd scale model of CSX 2287 as it ran at the Bonneville Salt Flats numbered and autographed by driver Craig Breedlove.

Archive Photo: A high quality photo reprint of one of Peter Brocks archive photos showing Breedlove in CSX2287 giving feedback to the crew on the Salt autographed by Breedlove. Detailed Description: A description written and autographed by Peter Brock describing what is unique about CSX 2287 as it ran on the Salt e. Livery, parts removed to increase speed, etc. You will be able to see the items described on this detailed and accurate model. HVA/Library of Congress Schematic: The schematic described in detail above is numbered starting at 127/175 e.

127/175, 128/175 for the event honoring Breedlove and Brock. It also comes with the Peter Brock 50th Anniversary gold foil seal numbered to match the seal on the model, the archive photo and the description letter also included in this set. Another Peter Brock model set will not contain all the items of this particular significance. This is a great gift or addition to your model collection or a great way to start collecting! The item "Shelby Daytona Coupe Model Limited, Landspeed Record Signed by Breedlove/Brock" is in sale since Thursday, July 13, 2017. This item is in the category "Toys & Hobbies\Diecast & Toy Vehicles\Cars\ Racing, NASCAR\Sport & Touring Cars". The seller is "bre-brock" and is located in Henderson, Nevada. This item can be shipped worldwide.