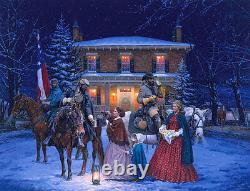 WE SUPPORT OUR TROOPS AND COUNTRY. THE ARTIST - JOHN PAUL STRAIN Artist John Paul Strain captures the color, drama and heroism of the Civil War with a vivid realism that is unique among the nation's top-ranking historical artists. A native Southerner born in Nashville, Tennessee, John Paul Strain has studied American History and the War Between the States in particular practically all of his life. He received his formal training at BYU, polished his professional techniques as an illustrator for the U. Department of Energy, and soon afterwards entered the field of historical fine art, prints and posters.

His early art, prints and posters depicting Civil War subjects produced the same enthusiastic response as his Western Art, and in the 1980s John Paul Strain began to concentrate on the Civil War. Few artists in the field have gained such widespread popularity so quickly. His art, prints and posters are now acclaimed among collectors, who prize his studies of Lee, Jackson, Forrest and other Civil War leaders, as well as his scenes of conflict and pageantry. His distinctive artistic style, which combines bright colors and contrasting shadows, and his devotion to historic authenticity have dramatically increased his popularity. Today, his original art is displayed throughout America and among collectors of fine art limited-edition Civil War prints. Artist John Paul Strain has become an American favorite. "Southern Hospitality" John Paul Strain S/N Limited E dition Print. General Stonewall Jackson & Colonel Turner Ashby Jackson's Headquarters - Romney, Western Virginia - January 14, 1862.

Eneral Stonewall Jackson and his troops had finally arrived in the town of Romney after a long and difficult passage through the mountains of western Virginia. A snow storm had blanketed the countryside and snow was still falling in Romney. The temperature did not get above twenty-seven degrees. Jackson's plan was to destroy and capture the Federal garrison located there.

But to the General's surprise, the Federals had abandoned Romney and fled the city not wishing to engage General Jackson's army. Jackson believed his success was nothing short of a miracle from God Almighty himself. Jackson made his headquarters in John Baker White's brick home located in the center of town.

Liberated from the Federal occupation, the citizenry of Romney was thrilled with the arrival of southern troops. Unlike other wars fought in different parts of the world, the Civil War was being fought on home ground. Women played an enormous role in the lives of southern soldiers. They looked for any way they could help.

Many offered their homes to wounded soldiers and became nurses, laundresses, cooks, couriers, spies, and writers. Women struggled to do the work of their men who had gone off to defend their country. They worked in the fields, and ran the family farm. A number of women in Winchester had knit enough socks to outfit the whole Stonewall Brigade. Unlike the Northern troops who were supported by great stores of material from rich and populous cities closely connected by rail, the Southern Army relied upon the generosity of the citizenry to sustain itself.

So it was with great appreciation on the snowy night of January 14th that Stonewall Jackson and Col. Ashby received a bit of heartfelt southern hospitality. Also available in these formats. Remarques on Lithographic Artist's Proof Print Edition Only. All Limited Edition prints are signed and numbered (S/N) by the artist and include a Certificate of Authenticity. Limited Edition prints are restricted to a certain number.

A remarque is a drawing done in the white border area of an art print. The subject of the remarque is usually determined by the artist. Each remarque is a piece of original art which adds to the value of the print by making that particular print unique and exclusive from the rest of the prints in the edition. All Limited Edition artwork is subject to availability at time of order. The item "Southern Hospitality John Paul Strain Civil War Print Jackson and Ashby" is in sale since Sunday, September 8, 2013.