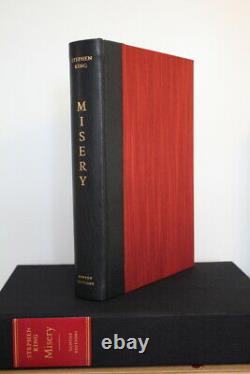 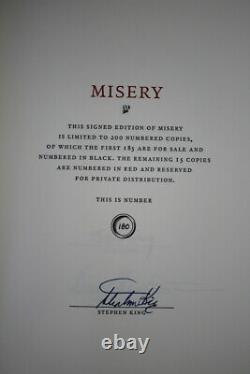 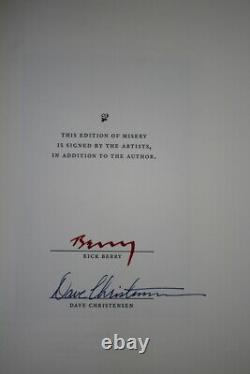 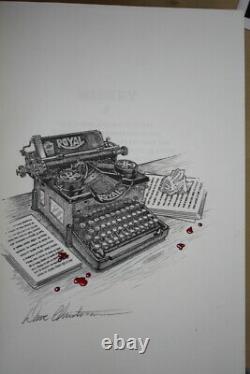 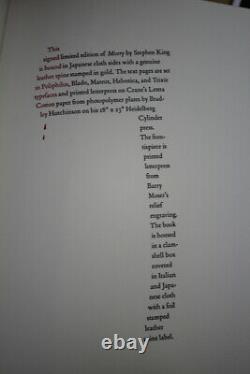 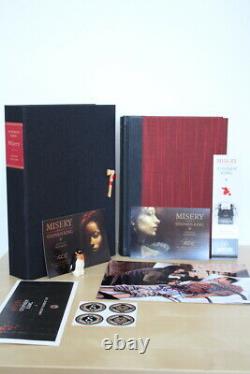 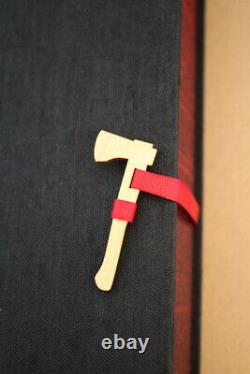 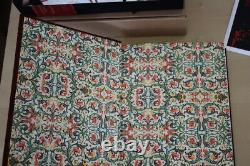 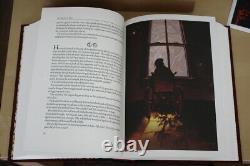 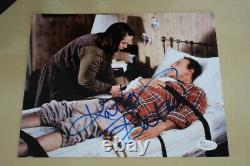 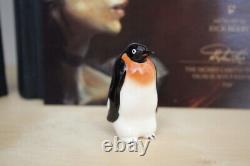 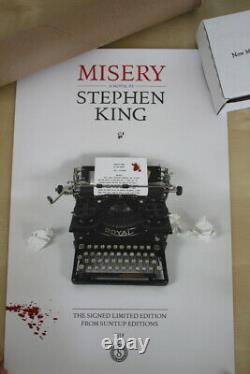 Stephen King (2018)' Misery', US signed limited edition , published by Suntup Press. One of only 185 numbered copies in black of a total print run of 200 copies, this being number 180. Signed by Stephen King on the limitation page, as well as by artists Rick Berry and Dave Christensen. Dave Christensen has also remarqued the book with an original sketch of the Royal typewriter on the blank prelim.

Only 50 books were remarqued by Dave Christensen upon publication. The photograph is signed by actress Kathy Bates who won an Academy Award for her role. All the Suntup promotional items are included: the ceramic emperor penguin made by world-famous Hagen-Renaker that appeared in the screen adaptation of.

Misery; the promotional poster; two postcards; a bookmark; and stickers. Condition : all in fine condition and in its original packaging. Production details according to the publisher : The Numbered edition is limited to 200 copies, and is signed by Stephen King, Rick Berry and Dave Christensen. The first 185 copies are for sale and numbered in black. The remaining 15 copies are numbered in red and reserved for private distribution. It is a smyth-sewn quarter leather binding, with Japanese cloth front and back boards and a gold foil stamped spine. The edition is printed letterpress on Cranes Lettra cotton paper, and housed in a custom clamshell box with a leather spine label. Without any doubt, the most beautiful King limited edition ever produced , with much love and attention to detail. Was originally published in 1987. Stephen King's writing reached a new level in the mid 1980s.

This item is in the category "Books, Comics & Magazines\Antiquarian & Collectable". The seller is "firstandfine" and is located in Birmingham.