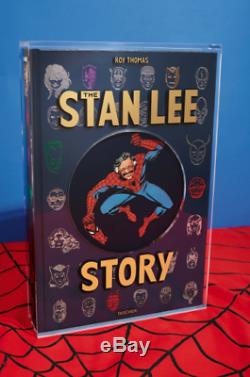 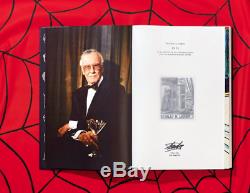 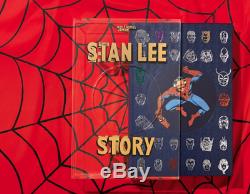 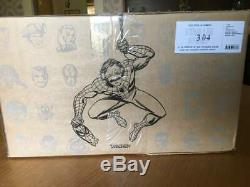 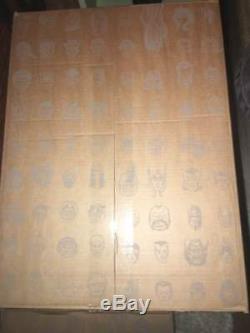 Pristine unopened limited edition collector's copy #304 of only 1,000 made. Don't miss out on having a piece of Stan Lee history, he signed these shortly before he passed away. ALL SALES ARE FINAL AS OPENING PACKAGING WILL AFFECT THE VALUE OF THIS BOOK!

This is the big one, True Believers! The mostly true tale of Stan Lee : an unparalleled, Giant-Size extravaganza, eight years in the making , about the one and only Godfather of Comics.

From his childhood in Depression-era New York, to making Marvel. Into the number one comics publisher in the world , to his modern-day reinvention as Chief Creative Officer of global entertainment company POW! Entertainment , Stan the Man Lee stands the test of time as the most legendary name in comicbook history. Stanley Lieber began working at Timely Comics in 1940 at the age of 17 and found himself at the helm of the bullpen as its top editor just two years later.

As an editor and writer he guided the company through good times and badWorld War II and the Korean War, the threat of government censorship, and changing readership tastesuntil 1961 when he ignited a revolution in comics , helped rebrand the publishing house as Marvel, and revitalized a dying industry with the Marvel Age of Comics. With a legendary stable of art partners including Jack Kirby , Steve Ditko , John Romita , and Jim Steranko , Lee unleashed a dizzying cascade of seminal comicbook creationsthe Fantastic Four , Hulk , Spider-Man , Thor , Iron Man , the X-Men , and the Avengers to name a few. After moving to Hollywood in 1980, he did it again, developing TV and film projects that laid the groundwork for the Marvel movie, now a cornerstone of 21st-century film. Stans constant cameo presence in these billion-dollar worldwide events is a testament to his influence.

As the man behind POW! Entertainment, he became a master of all media working with rock stars and professional sports leagues, movie mavens and reality TV showsreinforcing his creative stature the world over. Lees tale is told in this Collectors Edition by his successor at Marvel, renowned comics writer, editor, and historian Roy Thomas , who brings you are there insights and wide-eyed clarity to key moments of Lees journey to pop culture immortality. Featuring hundreds of treasures of comicbook art , a novel-length essay by Thomas, a foreword written by Lee himself , and intimate photographs sourced straight from his family archives, this is a titanic tribute worthy of the Man, not only in breadth but also in sheer size.

This Collectors Edition of 1,000 numbered copies, each signed by Stan Lee, includes. A foreword by Stan Lee and in-depth career biography by Roy Thomas. Complete facsimile comicbook reprints of Stans greatest hits and coveted rarities from throughout the decades, true to original size, tipped-in throughout the book; plus a separately bound reissue of Stan Lees 1947. More than 1,000 images, including intimate photographs and artifacts from Stan and Joan Lees personal archives, and new reproductions of original art and rare comicbooks from the vaults of the worlds premier Marvel collectors. Printed on archival paper and presented in an acrylic slipcase.

(19222018) is known to millions as the man whose super heroes propelled Marvel to its preeminent position in the comic book industry. His co-creations include Spider-Man, The Incredible Hulk, X-Men, The Fantastic Four, Iron Man, and hundreds of others. As the Chairman Emeritus of Marvel, he was also the Chief Creative Officer of POW!

Entertainment, where he created numerous new characters and stories in areas including publishing, film, TV reality, stage, documentary, and multimedia. Has been writing for movies, television, and especially comic books. Avengers, Uncanny X-Men, Conan the Barbarian, The Incredible Hulk.

He served as a Marvel editor from 196580 and editor-in-chief from 197274. He currently edits the comics-history magazine. Strips as well as the occasional comic book.