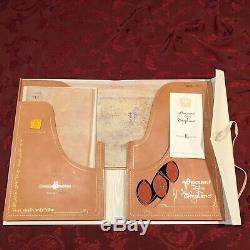 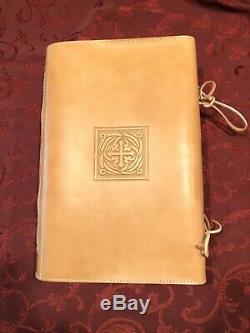 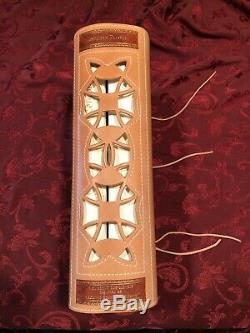 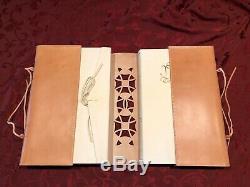 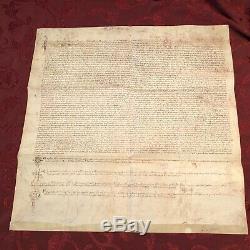 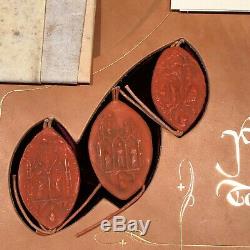 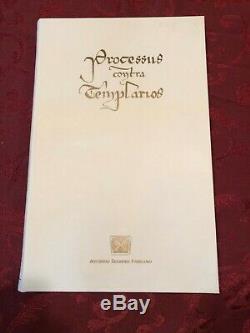 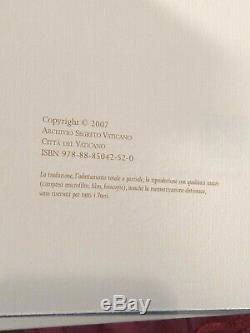 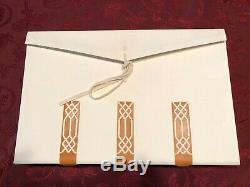 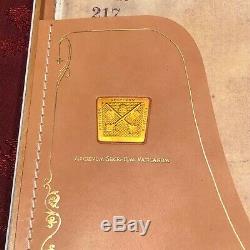 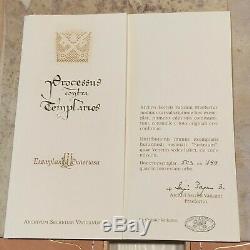 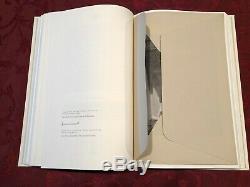 The first copy of this collection was given to Pope Benedict at the time of its publication in 2007 by Scrinium. This is copy 503 of 799 released to collectors. This special edition includes an exact.

Parchment of Chinon, a 1308 decision by Pope Clement to save the Knights Templars and their order. A long rumored document that was rediscovered in 2001 by Barbara Frale. Book and documents are in perfect unread condition as released by the publisher.

Description of the collection from. The Templars, whose full name was "Poor Fellow-Soldiers of Christ and of the Temple of Solomon", were founded in 1119 by knights sworn to protecting Christian pilgrims visiting the Holy Land after the Crusaders captured Jerusalem in 1099. They amassed enormous wealth and helped finance wars of some European monarchs. Legends of their hidden treasures, secret rituals and power have figured over the years in films and bestsellers such as "The Da Vinci Code".

The book and parchment publication is a special bilingual (Italian-English) version from the Vatican Secret Archive. The worldwide premiere was officially held at the Vatican on October 25, 2007, attended by high Vatican officers, members of the diplomatic body from the Holy Site, academics from Vatican universities, as well as outstanding representatives from the military, politics, professional associations and institutions. Years of research and organization, conducted by the Vatican Secret Archive on its source material, have made possible the publication of Processus Contra Templarios, the exclusive and previously unavailable hearing of the original acts of the ancient trial against the Templar Knights. A unique project in the world, this work comes in a limited run of 799 copies, under the supervision of the Papal Archive officials, and includes the faithful replicas of the original parchments kept at the Secret Archive along with a new and exclusive critical edition on the minutes of the inquiry.

A thorough analysis of the original parchments, performed through the technique known as "Wood lamp", which allows the recovery of parts of text unattainable to previous publishers, has made possible for the supervisors to amend older editions, so as to afford a more accurate and genuine reading of the documents. The filing of pre-existing sources has indeed allowed to recover misinterpreted text sections as well as standardize designations for both people and locations. Further to the record and transcription of papers and parchment documents, a section focuses on the review of the Templar history and on the trial against them. This publication is mostly valued with regard to its documents and critical texts, which help throw light onto the events which led the pontiff to acquit the Templar Order from the accusation of heresy. Clements V suspended the Templar Order, without disbanding it, and he eventually admitted the high Templar dignitaries and the entire Templar Order back into the Roman Church community. Faithful replicas of the original parchments stored at the Vatican Archive, crafted on special parchment paper, through state-of-the-art techniques, which make them even more readable than the originals. Hand-sewn like the original documents, these parchments appeal to the reader in all their solemnity. The first three documents filing codes ASV A.

208, 209, 210 refer to the papal inquiry on the Templar Order held in the French city of Poitiers. These are the surviving documents from an original body of five fabric-like rolls, containing the confessions made to Clements V by 72 templar knights under interrogation from June 28 to July 2, 1308. The fourth parchment (217), discovered on September 2001, includes the original absolution deed granted by the vicar cardinals to the Great Master of the Temple, Jacques de Molay and the high templar dignitaries at Chinon castle, where Philip the Fair had them illegally convicted. Edited upon order of pope Clements V, the record contains abstracts from the hearings of the Templars which appear on the parchments.

The presence of countless papal notes on the margins, very likely to belong to Clements V himself as he and his collaborators were accomplishing the hearings, gives this document a relevant value. The recovery of this precious sheet and the most recent find of the Chinon paper have unveiled a new path of research to academics, reinforcing the evidence that Clements V intended to preserve the existence of the Templar Order, assigning it a new role, after reforming both its practice and the discipline.

The parchments measure 53x69 (cm), and 64x77 (cm), in their smallest and largest sizes, respectively. The replica of the record sheet is made on paper from the well-known "Amatruda" papermakers, in Amalfi, Italy.

It is a special paper in 100% pure cotton, gr. Mt, manufactured through ancient handmade crafts.

THE VOLUME, A special edition from the Vatican Secret Archive: It includes the critical edition of the trial papers, thanks to a meticulous and painstaking sifting of the original documents attained through the use of the "Wood lamp", effective toward the recovery of text parts unavailable to previous publishers. A scientific work which surpasses the previous edition released by Schottmüller back in 1887, and includes documents of recent find.

Historical facts on the trial by Barbara Frale, supervisor of the Vatican Secret Archive. Research and investigation on the seals by Luca Becchetti, supervisor and restorer of the seals of the Vatican Secret Archive. The volume, elegantly bound in parchment with golden writings on its front and back, measures 29X45 (cm), comes in 256 entirely hand-sewn pages, and can be regarded among high quality art publications.

Along with the written section, and aside from the drawings, the edition includes, appropriately appended, three replicas of previously unreleased engravings by Domenico Marchetti, taken from a sketch by Tommaso De Vivo, and realized on clear outline, "water-cut" sheets (taglio a filo dacqua), thanks to refined graphic technique. THE EXTERNAL CASE AND THE DOCUMENTS BOX, Classiness and unmatched quality: The natural-leather case, Tuscan-style (Toscano pieno fiore), craftily assembled thanks to a procedure known as concia vegetale, is hand-finished and measures 47X33X12.5 (cm). The case is made from a unique streak of leather, which wraps either the documents box and the commentary volume. It is assembled through ancient manual crafts; the leather on the back is engraved with a motif which dates back to the 12th century and recalls the Templar cross, suggesting the elegant finishing of the two sheltered items. The style of the documents box recalls the stiff bindings in use at archives for many centuries. Wrapped in a single goat-leather parchment, treated upon ancient crafts, it is an exact replica of the chests used to store documents at the Vatican Secret Archive across the centuries. The documents box is entirely handmade; all details are reproduced with the same refinement as the originals. All materials have been selected based on their durability, and have been crafted according to ancient skills: this allows them to appear as if they would shift colours, nuances, and shades as time flows by. THE SEALS: After 700 years comes the light: The red wax seals belonging to the inquiring cardinals Pietro Colonna, Pierre de La Chapel and Berenger Frèdol look identical to the originals in their richest and characteristic iconography; the seals are made from moulds kept at the Vatican Archive, through an accurate sequence of manual crafts, and the delicate coating phase, which dramatically ages each single seal of 700 years. The announcement and presentation of the collection was made on October 25, 2007, in the impressive Old Synod Hall at the Vatican Library, the Vatican Secret Archives presented to the press and the international public a very important cultural event of extraordinary general interest: the first and only edition of the entire proceedings of the momentous Trial of the Templars, a set of mysterious ancient parchments kept for centuries in the Vaticans archives, which has now been brought to light again thanks to the collaboration between the papal archives and Scrinium in the context of the Exemplaria Praetiosa Project.

The Vaticans decision to publish the trial records, dated 1308, immediately aroused international interest. The event attracted the attention of major newspapers and networks all over the world, which within a few hours had reported the story, focusing in particular on the finding of the famous Chinon Parchment, which records the canonical absolutions from the charges of heresy granted by pope Clement V to the Knights Templar of France. The speakers at the presentation were Card. Raffaele Farina, Archivist and Librarian of the Holy Roman Church; Msgr. Sergio Pagano, Prefect of the Vatican Secret Archives; Barbara Frale and Marco Maiorino, Supervisors of the archives; medievalist Franco Cardini; and Ferdinando Santoro, president of Scrinium.

Valerio Massimo Manfredi, archeologist and writer. Ferdinando Santoro, president of Scrinium, fiduciary of the Vatican Secret Archives. We do not mark merchandise values below value or mark items as "gifts" - US and International government regulations prohibit such behavior. Our success is based entirely on providing the best service and products to our customers. Keeping your trust and faith in us is the basis for everything we do. Designated trademarks and brands are the property of their respective owners. The item "Vatican Secret Archives Processus Contra Templarios Scrinium Knights Templar" is in sale since Sunday, November 3, 2019. This item is in the category "Books\Antiquarian & Collectible". The seller is "extraordinary-things" and is located in Michigan. This item can be shipped to United States.